I’m also Co-managing my devices and deploy regular updates via Windows Update for Business. Just not feature updates. I fancy the full-control approach, taking the opportunity to update BIOS and drivers while at it. Everything works directly over the Internet via the Cloud Management Gateway. No hard requirements in being on-premises or on VPN.

I have previously shared my precache and in-place upgrade task sequences. A lot have happened since then, and I wanted to take the opportunity to share my updated approach in details.

I’m covering each and every step, just like I did in my previous blog posts. Some steps are exactly the same, but in order to fully supersede the old posts, I’m covering everything in details here.

Now, I can’t go over explaining my WaaS process without mentioning THE OSD experts Gary Blok, Mike Terrill. They are tirelessly sharing their approach as well. If you are looking for a WaaS solution on steroids, I suggest you head over to garytown.com and miketerrill.net for inspiration.

If you are looking for something less advanced, then you are at the right place. With that being said, some of the stuff I do, is done with inspiration from what Gary is sharing at garytown.com – just without the steroids. 😛

And yes! The task sequence will be available for download in the very end of the post! 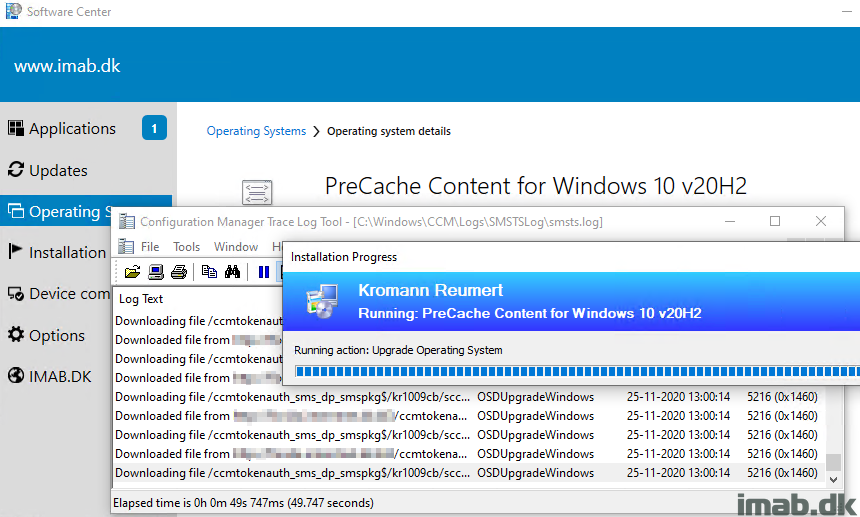 This is where the actual upgrade takes place, following some other actions like flashing the BIOS etc. With my previous post, we made sure that all the content referenced by this very task sequence, already exists in the Configuration Manager cache. By doing so, we cut down the time the end user has to wait dramatically. Also, this enables us to allow the task sequence to be run from VPN or over the Internet through our CMG, without the need to download any content while being remote. Sweet! 🙂

This is my task sequence in details step-by-step. Some of the steps are explained in the PreCache post and some of them are self-explanatory. If they are, I’m not going to cover them again – apologies.

This is the parent group for the entire IPU TS (In-Place Upgrade Task Sequence). This is configured with ‘Continue on error’, as error handling is done in the very end in the task sequence.

This step records the date and time of when the In-Place Upgrade Task Sequence was started. The date and time is later picked up by a PowerShell script, and written into registry to be inventoried.

This step is used to create the relevant structure in registry, as well as locally in C:\ProgramData.

NOTE: This should make it fairly easy to modify the entire task sequence to use with your process. Changing the value here, will change the value everywhere throughout the task sequence.

This step is used to create the relevant structure in registry, as well as locally in C:\ProgramData.

NOTE: This should make it fairly easy to modify the entire task sequence to use with your own process. Changing the value here, will change the value everywhere throughout the task sequence.

This step removes the unnecessary delay when rebooting the computer. By default, this is set to 30 seconds.

This step sets the initial UpgradeStatus registry key to 1, indicating a failure. This is supposed to be updated later on, when everything succeeds and we have verified that Windows 10 is now 20H2 (or whatever version of Windows you are deploying). The idea is, that the upgrade is considered a failure until this key has been updated. More on this later on. Also, this is being picked up by hardware inventory for use with collections.

This is probably controversial and some would argue it’s not required and that the Windows setup does this automatically, BUT I have still seen devices prompting for BitLocker PIN (Yes, we have devices with BL PINs 🙁 ) during the reboot, so I took the consequence of disabling BitLocker manually. Notice this is not done with the built-in step, but rather done with manage-bde and RC 0 (Restart Count) which disables BitLocker infinitely regardless of how many reboots.

All of these steps are exactly identical to the steps in the PreCache Task Sequence, with the exception of manually failing the TS if the Readiness Check is failing. I’ll elaborate further in the next section. 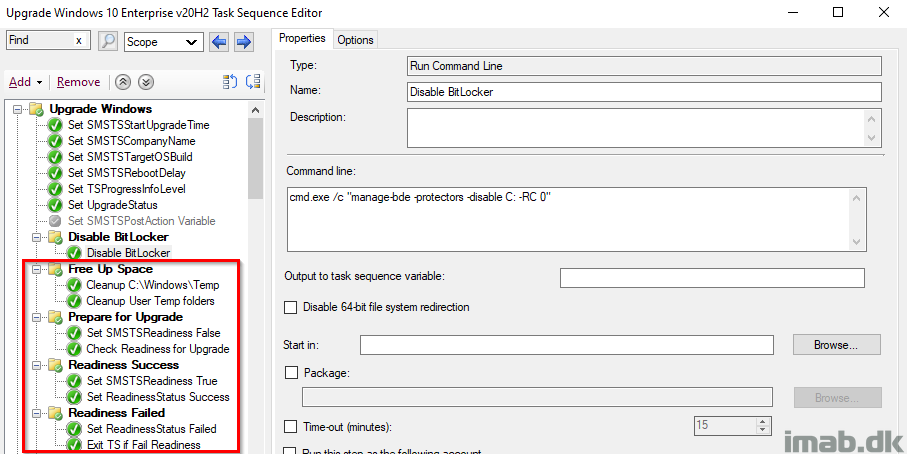 The group Prepare for Upgrade, containing the actual Readiness Check, has ‘Continue on error’ set, as we want the TS to continue on to the next steps, for proper registry tattooing for success or failure. That’s why we need to ‘manually’ fail the task sequence, forcing the TS to fail and move all the way to our error handling in the end.

This step is essentially done with inspiration from Jason Sandy’s post on Per User Login Message: https://home.configmgrftw.com/per-user-login-message/. Difference is that I’m not using UI++, but Powershell App Deployment Toolkit for the notification. My users are used to seeing PSADT, so I figured I would use something they would easily recognize.

I promised to make the binaries used available for download. So here goes: Upgrade-StillRunning-v2009.zip (1368 downloads)

For your convenience, this is the message that is being displayed, if the user logs on while the upgrade is still running: 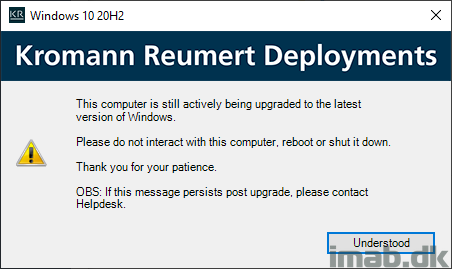 I’m upgrading the drivers in the process, and I do it, in a not so typical fashion with WIM files. The process is explained in more detail here: Precache and update drivers as WIM during In-Place Upgrade Task Sequences with Configuration Manager

The process has been updated slightly, to honor the variables SMSTSTargetOSBuild and SMSTSCompanyName. 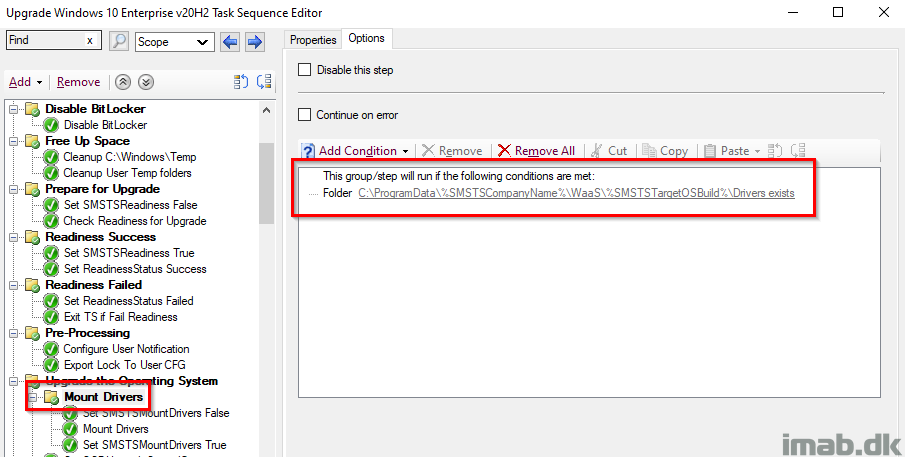 Mounting of the WIM file containing the drivers, is happening with a PowerShell script. This script has also been updated to honor the variables SMSTSTargetOSBuild and SMSTSCompanyName.

The script used can be found here on my GitHub page: WaaS/Mount-Drivers.ps1 at main · imabdk/WaaS 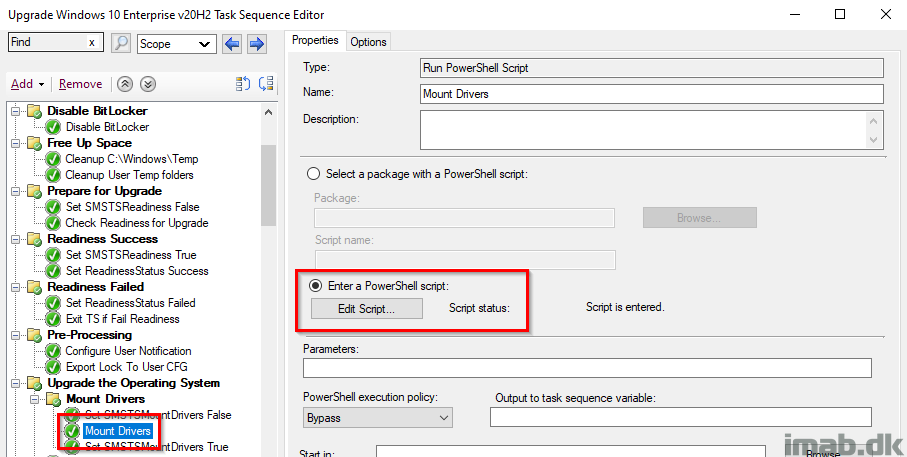 Here I’m leveraging a task sequence variable called OSDUpgradeStagedContent, which essentially instructs the Windows setup to use the drivers that I have mounted via the WIM file.

This might cause some wondering for some, but in my scenario, I initially and possibly have a user-centric Always On VPN tunnel active, which is being disconnected during the reboot of the Windows setup. From there the Configuration Manager client switches to Currently Internet and connects to the Cloud Management Gateway, and I’ve seen some waiting here and there for status messages to be sent back to the CMG.

What I do next, POST the Windows 10 setup, is to check for network connectivity. I have seen scenarios, where devices connected via Wi-Fi, being remote or in office, simply fails to reconnect to the network.

In case of no network connectivity, I want to make sure that status messages are not being retried, making the task sequence run for a very long time. 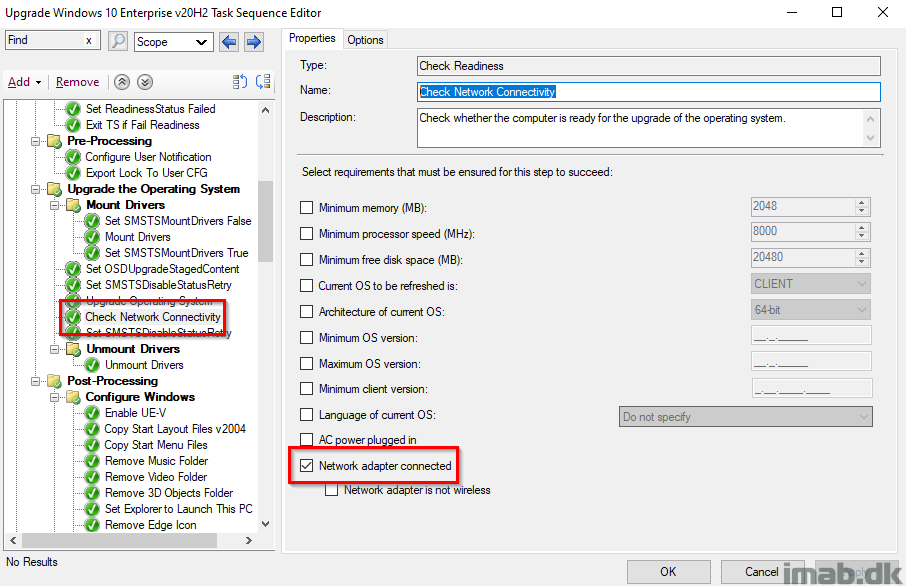 Setting SMSTSDisableStatusRetry again, but conditionally and only if the device is either on the Internet with my CMG as management point, or if the device simply is offline at this stage. 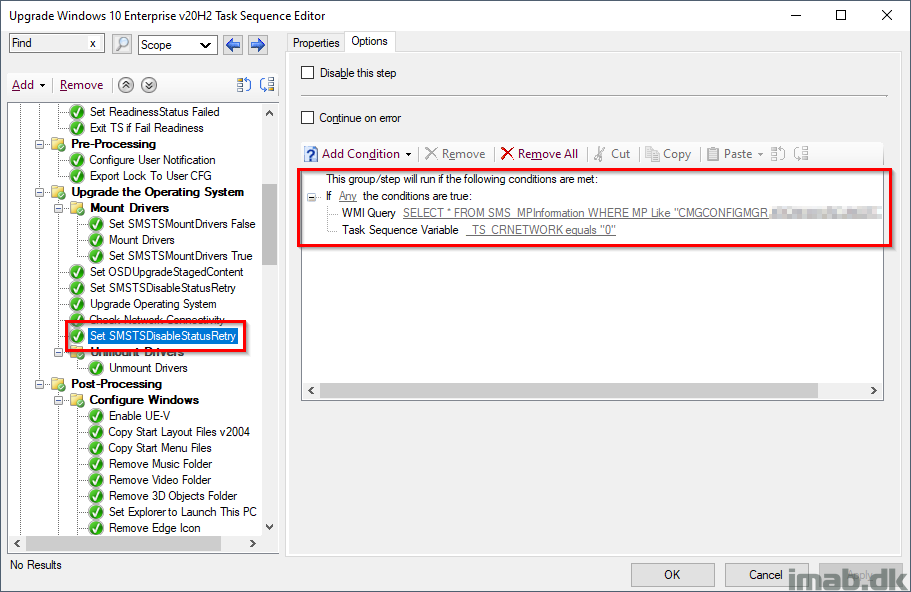 This group makes sure, that the subsequent step is only run, if there indeed was downloaded and mounted any drivers. This is to prevent, that the unmounting is happening with no drivers present, as this would cause the step to fail.

This step unmounts the WIM containing the drivers again, freeing up the space used.

Removing the run key once again for the user’s profile, so the user no longer sees the message in Powershell App Deployment Toolkit.

Retrieving the actual Windows build number from the registry, and store it into the SMSTSCurrentOSBuild variable. At this point, we would expect this to be 2009 and can take actions accordingly based on that.

This step records the date and time, of when the In-Place Upgrade Task Sequence is done running. The date and time is later picked up by a PowerShell script, and written into registry to be inventoried.

This step is the final piece of the puzzle, running a PowerShell script, which will tattoo the complete upgrade status into the registry.

The PowerShell script can be found here on my GitHub page: WaaS/SetUpgradeResults.ps1 at main · imabdk/WaaS

The registry at this point, will hopefully look somewhat similar to below illustration. In this scenario, everything completed successfully.

This combined with the previous step, is an additional check on whether the upgrade indeed was successful and the build is now 2009. This group will run, if the current OS build is NOT equal to what we initially set in the task sequence.

This entire group will run, if the Windows build turns out as expected, and thus enables us to run some additional actions. This is paired with its parent group, which together indicates both a SUCCESS on the actual upgrade AND the correct build number retrieved live from the registry.

If everything completed successfully, I’m going to clean up everything that was precached in the custom folder in C:\ProgramData. This is happening conditionally and only if the folder exists.

Inside or Outside LAN

While everything is successful at this stage, I’m doing something extra in case the upgrade happened from the Internet. This is solely done for reporting purposes. 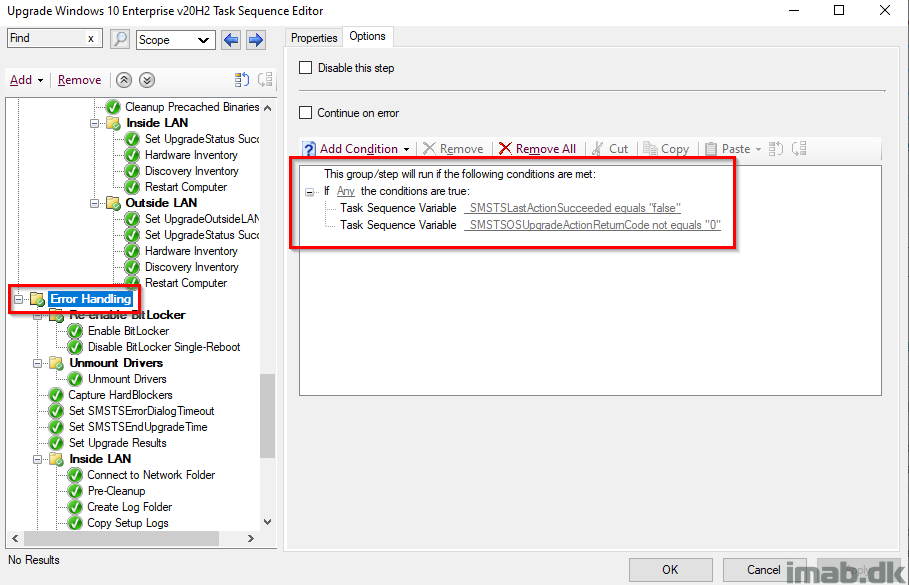 This step runs a PowerShell script, which will capture any hard blockers (should any hard blocker have been introduced since the PreCaching) and tattoo them into registry.

The PowerShell script is found in my GitHub page here: https://github.com/imabdk/WaaS/blob/main/Capture-HardBlockers.ps1

This script also uses the variables SMSTSCompanyName and SMSTSTargetOSBuild that we configured in the beginning, so everything is done dynamically.

As the description says, this is set to have the task sequence to fail immediately without counting down from 15 minutes (If my memory serves me right, 15 minutes is the default here).

Inside or Outside LAN

Most of the steps here are explained in very good details in my first post: Windows as a Service: Sharing my PreCache and In-Place Upgrade Task Sequences – 20H2 edition, part 1

Basically, I’m doing all sorts of tattooing of registry and picking up log files for troubleshooting purposes. 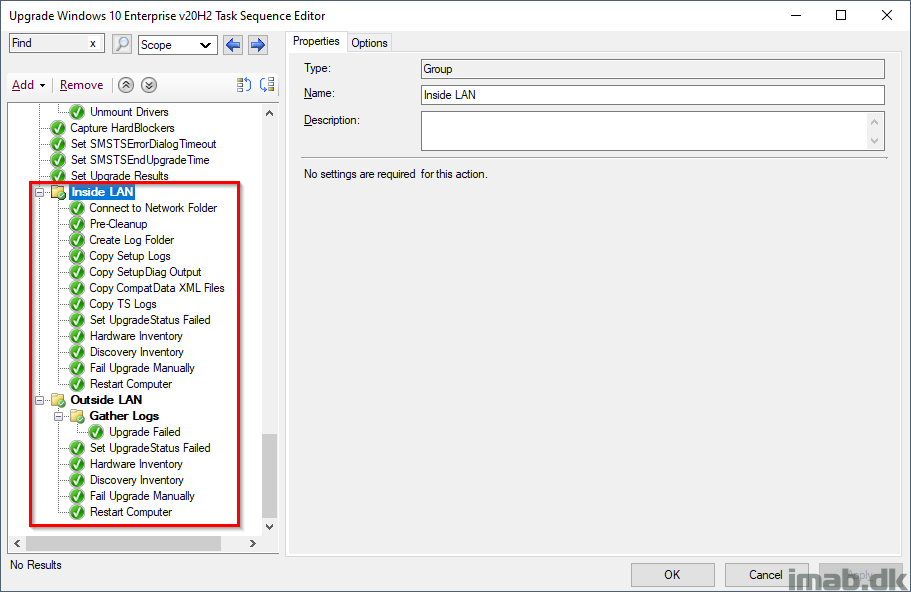 And when deploying the IPU task sequence, remember to deploy it with following deployment option: Download all content locally before starting task sequence. This will make sure that the content already in the CCM cache is used and that content is not being redownloaded. 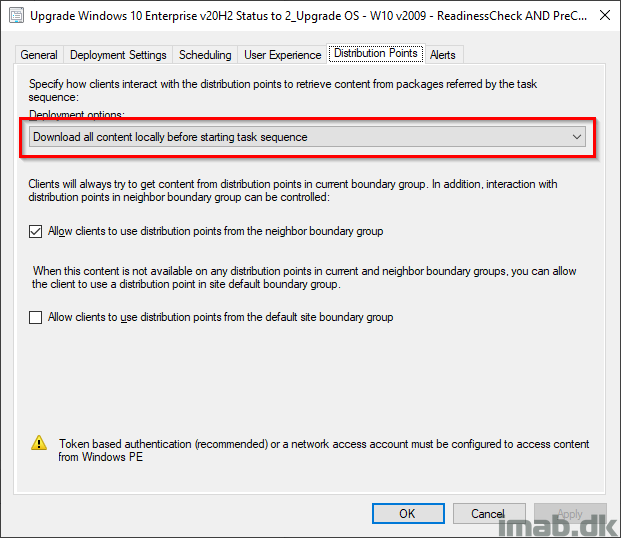 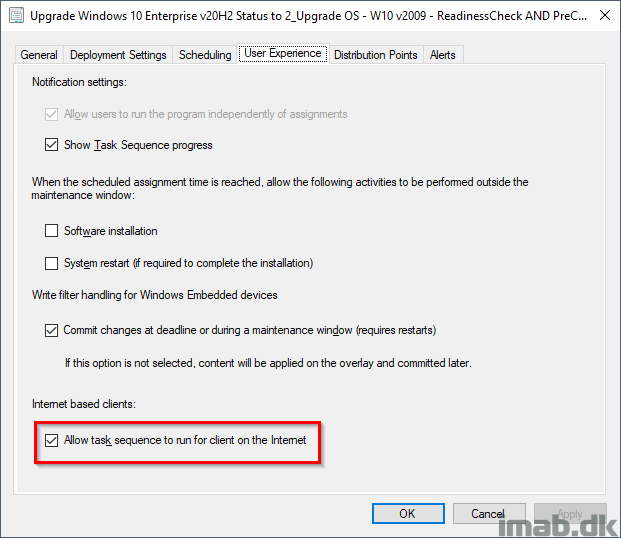 Download my entire IPU Task Sequence here. Note that it’s exported without dependencies. I believe it’s the steps that are interesting here. Insert your own stuff where needed: imab.dk-IPUTS-20H2.zip (1624 downloads) (Updated on 22 April 2021)

Let me know in the comment section down below if you need anything elaborated or if anything is missing out. I will make sure to reply promptly. 🙂