Not too long ago, I did a post on how to apply drivers compressed with WIM during OSD with Configuration Manager.

Continuing on the same topic and story about ‘Drivers as WIM’, I wanted to explore the option for using WIM when precaching and updating drivers during an In-Place Upgrade of Windows 10. The results made up this new blog post. 🙂

I’m obviously using a separate task sequence for all of my precaching steps. Not all the steps are relevant for this post, so I’m only elaborating on those important for the understanding of this topic.

All of my WIM files are kept in regular packages with no program. One package for each computer model. 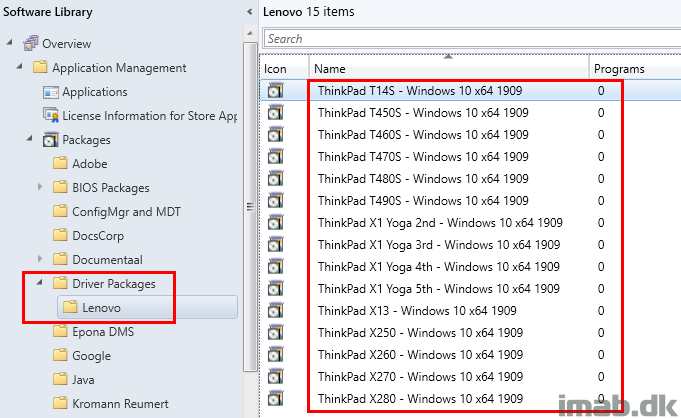 First relevant step is to precache the actual WIM file.

In this example, I’m precaching the drivers for Lenovo ThinkPad T470S using a Download Package Content step, into the custom path: C:\ProgramData\KromannReumert\IPUContent\v2004\Drivers 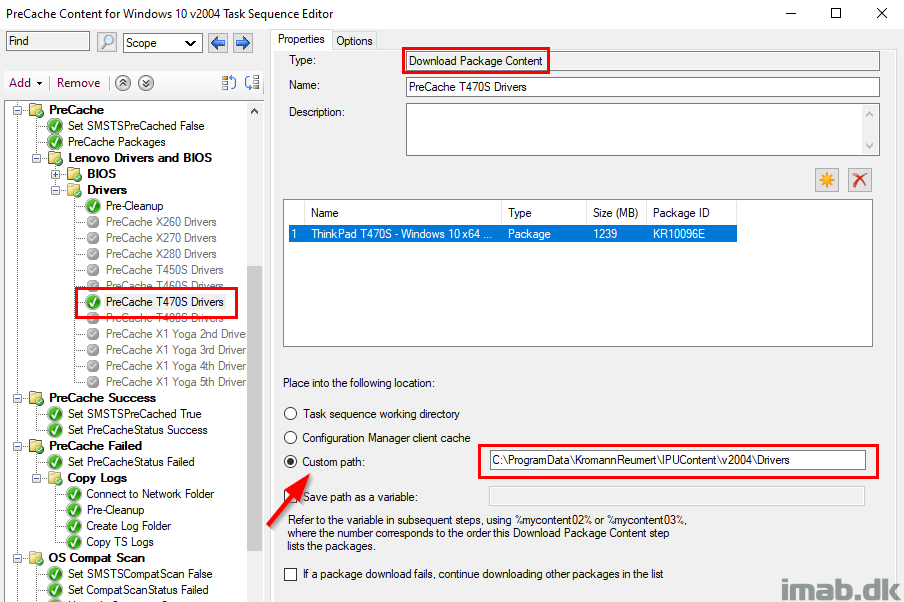 I’m also using a WMI filter as a condition, to only download the relevant package for each model.

Once the precaching task sequence has run, you will find the content of the package containing the WIM file in the custom path.

Moving on to using the precached WIM file during the actual In-Place Upgrade Task Sequence.

I start off by having a group, which is only run if there actually is drivers (a WIM file) precached during the PreCache Task Sequence.

As of such, a condition is created on the group, telling the group to only run the steps, if the path I used in the precaching task sequence exists.

I start the Mount Drivers group off by setting a custom Task Sequence variable SMSTSMountDrivers to False.

I do this, because I need the value of this variable, to determine how some of the following steps needs to be executed.

This is the step, where I’m going to mount the precached WIM file. This is probably also the step, which requires the most attention, as this is done with a PowerShell script.

I’ve tried my best with the commenting throughout the script, but what’s essential here is: 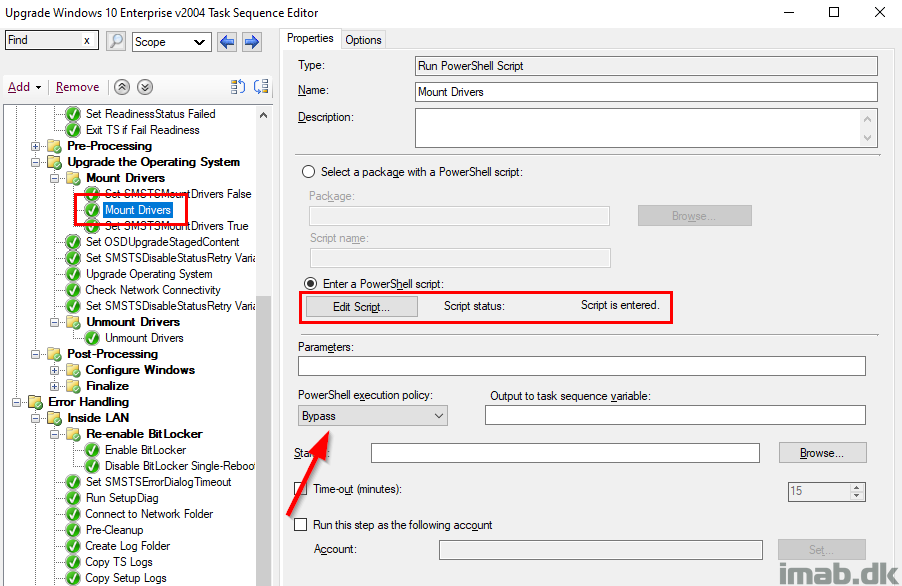 Now I want to change the value of the SMSTSMountDrivers variable to True, but I only want to do that if the WIM indeed was mounted.

Therefore this is done with a condition, to only run the step, if the previous step was successful.

Here I’m leveraging a task sequence variable called OSDUpgradeStagedContent, which essentially instructs the Windows setup to use the content that I now have mounted via the WIM file.

And again, to prevent unexpected errors and failures, this is only done if the mount of the WIM file was successful.

Finally and post upgrade, I’m unmounting the WIM again. This will automatically clean up the mounted files.

This is done with a condition as well, so the task sequence only tries to unmount the WIM, if it was mounted in the first place.

As a good practice, I don’t want to leave behind a bulky WIM file taking up space, so once the In-Place Upgrade is successful, I delete the directory where the WIM was precached to.

And I only do so, if there is something to delete.