Update! The content in this post, has been updated: Windows as a Service: Sharing my PreCache and In-Place Upgrade Task Sequences – 20H2 edition, part 1

This is an extremely hot topic and I do know that we have some awesome OSD experts out there sharing their content already (Gary Blok, Mike Terrill etc.).  Now, their content is way superior to mine and probably satisfy a lot of needs already, but I think that content around WaaS in particular is interesting and especially when sharing how one does Windows Servicing in details.

So, this is me doing just that – sharing my precaching and in-place upgrade task sequences – in details. This will be a lengthy post, so grab a good cup of coffee 🙂 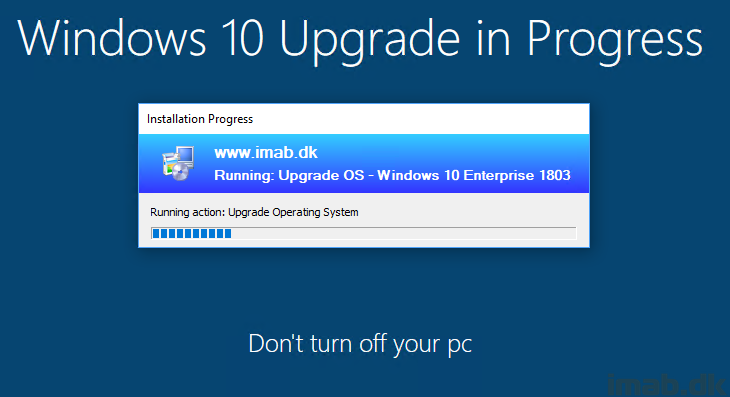 PreCaching is a must in my opinion. The Windows 10 upgrade already takes a considerable amount of time to complete and even more so if all the content needs to be downloaded once the user initiates the upgrade. Making sure the content is present in the CM cache before making the actual In-Place Uprade Task Sequence available is key. I also run Readiness and Compatibility Scan during the PreCache TS, also to make sure that the actual upgrade will run with higher chances of success.

Enough with the talking, here’s the details step-by-step:

This step is probably a tad controversial (The CCM cache usually takes care of itself). I run a CM cache on 20480MB translating into 20GB. The content of my IPU is around 13GB and I have seen a few times that the CM cache was lacking sufficient free space or at least that what’s the CAS.log told me. I really really want the PreCaching to be done and preferably in the first run, so I’m doing some custom cleanup using a custom Powershell script as the very first step. The script only deletes content older than x days and excludes certain packageIDs and thus doesn’t touch any of the content provided by its own task sequence (that’d be silly)

First off, this is copied directly from Gary Blok’s Task Sequence over at garytown.com and is pretty straight forward: Delete files in Windows\Temp and temp in each user profile with a condition to only run if there is less than 20GB available free space on the hard drive.

For your convenience, I’m adding screenshots of the content when it makes sense to. I will however make the entire Task Sequence available for download in the end of the post.

And another Powershell one-liner to loop through each user profile and delete more content.

Initially setting the SMSTSReadiness variable to False. This is later used to indicate whether the actual Readiness Check was run successfully.

This step is pretty self explanatory. I want to make sure there’s at least 20GB of free space on the hard drive. If this step fails to run, the task sequence will continue (‘Continue on error’ on the entire group. I want to continue precaching content), but will also run the steps in the Readiness Failed group.

This entire group runs, if the SMSTSLastActionSucceeded renders True which translates into running if the Prepare for Upgrade group ran successfully.

This time setting SMSTSReadiness to True, because if this step runs, that means the Readiness ran successfully.

This steps is tattooing the registry with a status of success for the Readiness Check. This is later inventoried with hardware inventory and used with collections – I’ll go into details on this part later on.

ReadinessStatus with a value of 0 indicates a success.

Again, tattooing the registry with a ReadinessStatus of 1 which equals to failed. This is also picked up by hardware inventory and used with collections.

This group will make sure to copy out the smsts.log to a network location for when the Readiness Check failed.

The steps will also create a sub folder with the name of the computer failing the Readiness Check and another sub folder indicating which step that failed. In this case ReadinessFailed. I rename the smsts.log to -precache to indicate what task sequence that was run (the readiness check is also being run in the actual in-place upgrade task sequence).

This entire group also has ‘Continue on error’ set. I want the task sequence to continue regardless of errors, and instead provide me with the info on successes and failures through the tattooing and inventory.

Also, this group begins with setting the SMSTSPreCached variable to False.

This group runs if the previous action also ran, which translates to every single step in the previous group, making sure that everything is precached. If the packageID already exists in the CM cache, the content is kept in the cache and not re-downloaded.

Setting the SMSTSPreCached variable to True. Again, this is because the actual precaching was done successfully and thus we change the value from False to True for later use.

Another registry-tattooing setting the PreCacheStatus registry key to 0, which indicates a success. This is still being picked up by hardware inventory.

This is completely identical to the Readiness Failed step. This group runs if the SMSTSPreCache variable is still set to False, which means something wasn’t precached successfully and additional steps is required.

Again, something during the PreCache failed thus tattooing the registry with PreCacheStatus with a value of 1.

Continuing copying out logs to a network share if something in the PreCache step failed.

And again doing so to a custom sub folder to a folder for the computer failing. 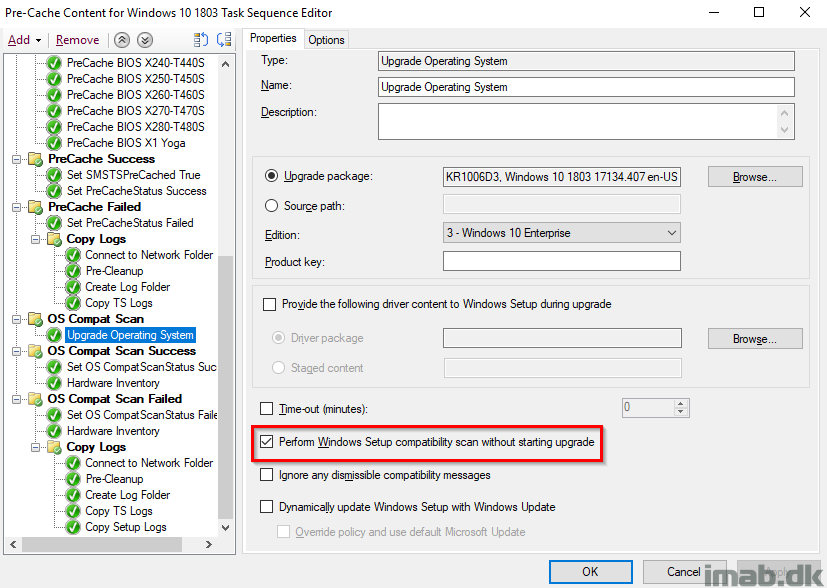 This group will run if the actual compatibility scan is coming out OK. That translates into a hex-value which again translates into a decimal value of 3247440400. More on upgrade error codes here: https://docs.microsoft.com/en-us/windows/deployment/upgrade/upgrade-error-codes 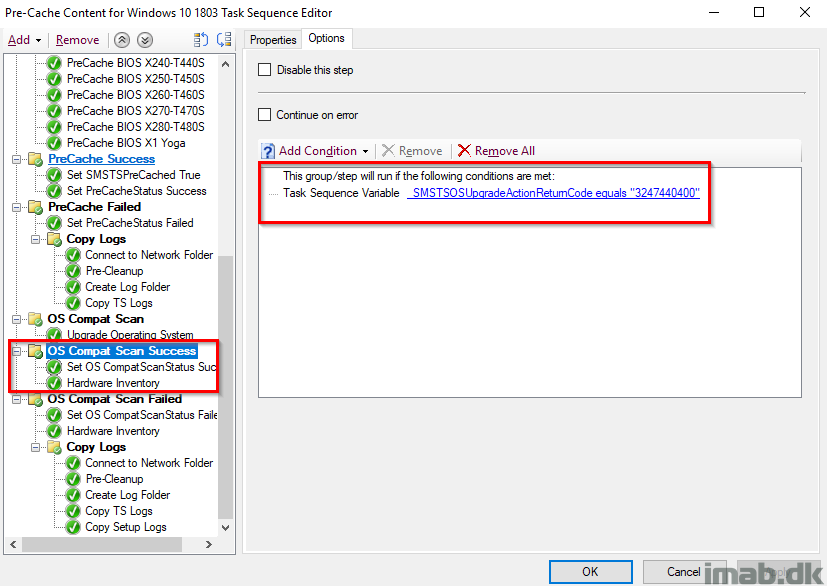 Tattooing the registry with a registry key CompatScanStatus with a value of 0 which will indicate a success when picked up by hardware inventory. 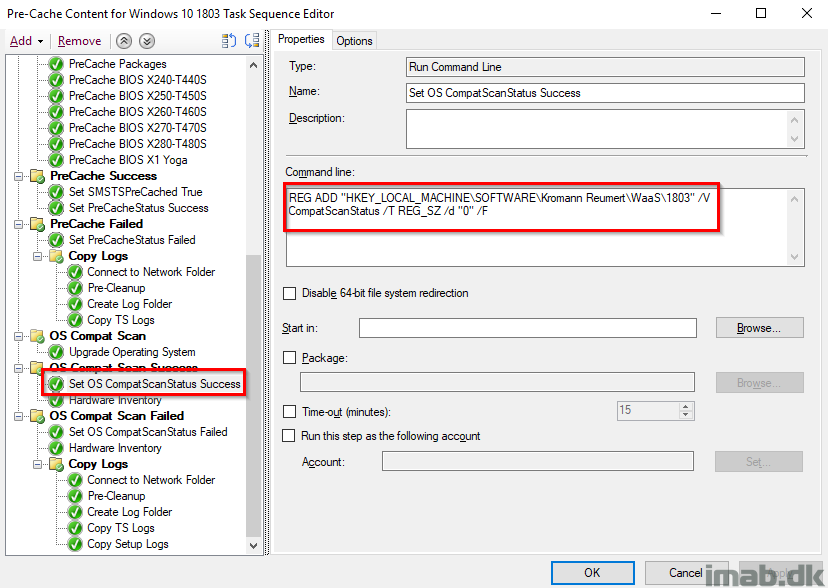 Running hardware inventory picking up all the previous steps successes or failures. This time running post the OS compat scan success, which in this scenario is the final step.

Doing the exact same thing for the failure part, which also will be the last step to run regardless of any of the previous successes or failures. This way I always end the TS with running hardware inventory.

Why using a package to do this, you may ask? Simply because SendSchedule has more client actions to it and the proper way to do it imo: https://docs.microsoft.com/en-us/sccm/core/support/send-schedule-tool 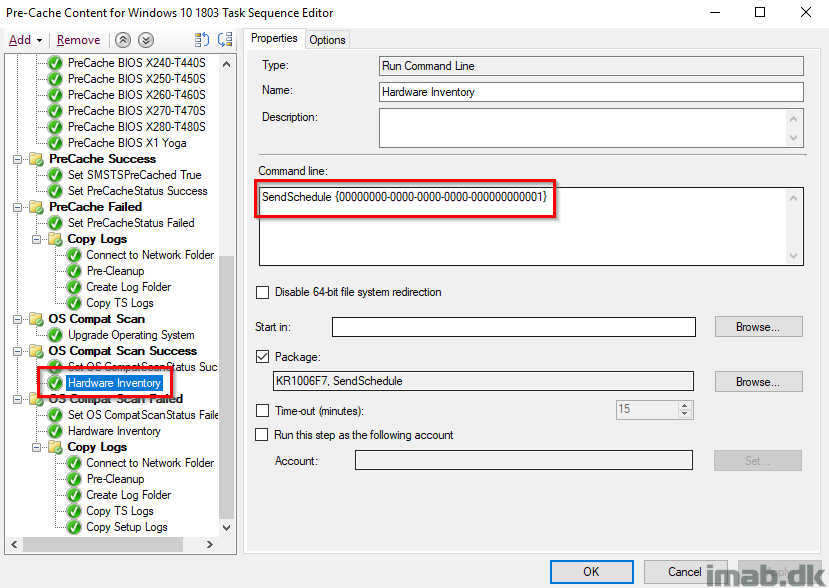 This step will run if the OS compatibility scan is NOT OK. In this case using not equals with the SMSTSOSUpgradeActionReturnCode variable. 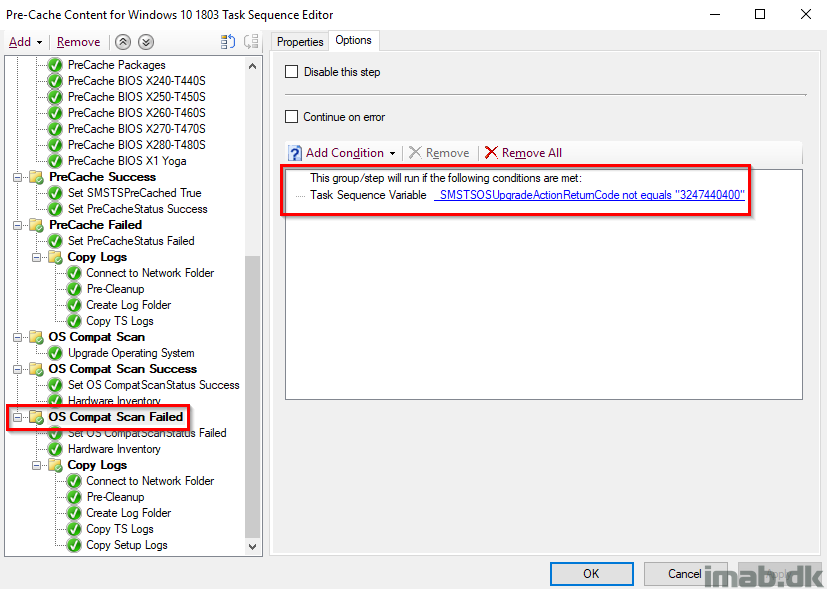 And finally tattooing the registry yet again with CompatScanStatus with a value of 1 indicating a failure. 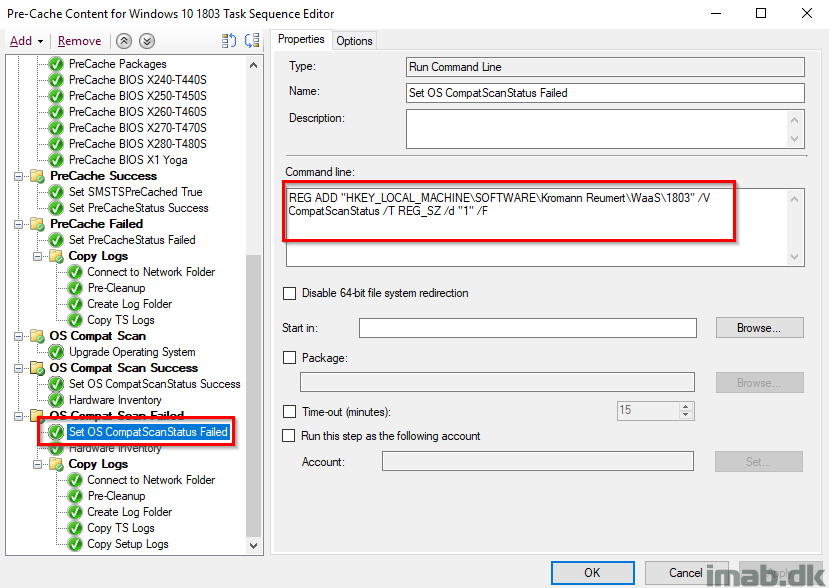 Similar to the previous Copy Logs steps, now also adding the setup logs. These are obviously interesting for more insights on the compatibility scan part and why it failed. 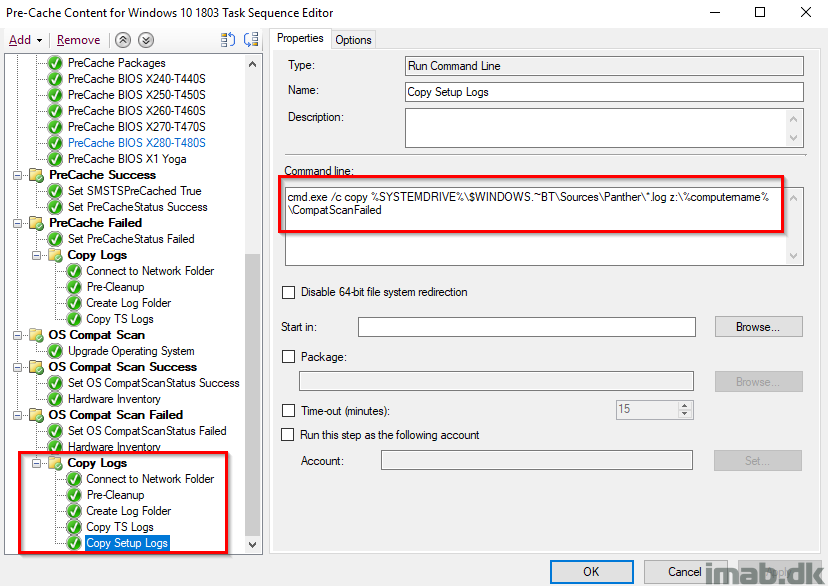 The step will create another sub folder called CompatScanFailed where to both the setup logs and smsts.log will be copied.

With all that info being tattooed into the registry it’s now time to make use of it. The idea here is, that before a given computer is offered the actual In-Place Upgrade Task Sequence, you want to make sure that the computer has passed the Readiness Check, the Precaching AND the OS Compat Scan.

Luckily, all of that info is stored for us in the registry and when picked up by hardware inventory, we can use that in collections (Note: it’s not picked up by default, you will have to extend hardware inventory to do that. Here’s an very old post of mine, sparingly describing how: https://www.imab.dk/extending-hardware-inventory-in-sccm2012/)

Below is the exact collection membership criteria of my collection, which then only have members where ALL of the checks done during the PreCaching is successfully completed. Nice! 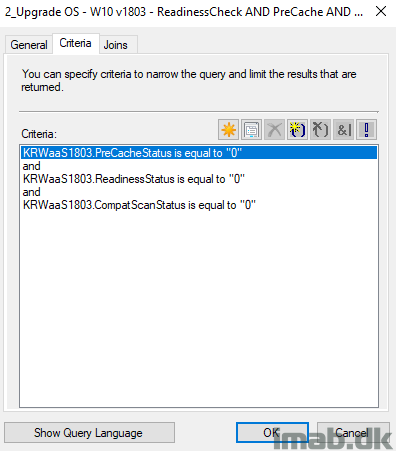 Here’s another set of collections for your inspiration which also easily will display if you have computers failing either of the important steps allowing you to quickly take the required actions, for example rerunning the task sequence, investigate logs etc.

An example is to have the PreCache Task Sequence to run on a recurrent schedule for some of the FAILED collections, assuming you then and in between schedules will fix the issues.

Also, when deploying the PreCache Task Sequence, make sure you do so with following settings. You want this to run completely silent for the end-user.

The script used for cleaning the CCM cache has been requested. So here it is. Use as you see fit. Needless to say: Test, test and test first. There are some references to my company for the registry. You might want to modify that 🙂

Update 11 january 2019: A comment on Facebook inspired me to do a slight change to the Clean-CMCache script. Instead of plainly deleting content older than x days, I’m instead deleting content if it’s not a part of the PreCache or IPU TS (Any of the packageIDs used). See the updated script below.

Stay tuned for part 2, where I will walk you through my In-Place Upgrade Task sequence.

87 thoughts on “Windows as a Service: Sharing my PreCache and In-Place Upgrade Task Sequences, part 1”