I typically blog about topics, that I’m currently addressing in my own daily work, and this time is no different.

Covid-19 surely has a saying on this particular topic as well, and empowering our users to do more, working securely from home and remote, is key.

In that regard, we needed a simple VPN solution for our iOS devices, and while making my way through the setup and configuration of Microsoft Tunnel Gateway, I decided it was worth blogging as well.

This post will walk you through everything you need know, in order to successfully setup Microsoft Tunnel Gateway as a proof of concept.

I won’t go into super details on how the VM(s) in Azure are created, but instead just highlight the important bits and pieces of the setup.

I’m creating the below VM, as I write this post. This is also the VM, which will be proving working with the Microsoft Tunnel Gateway configuration, when you are done reading this post.

A lot of below options will wary depending on your infrastructure. The important parts are to select a supported OS and proper inbound ports. I’m using Ubuntu 18.0.4 and opening port 443 and 22. 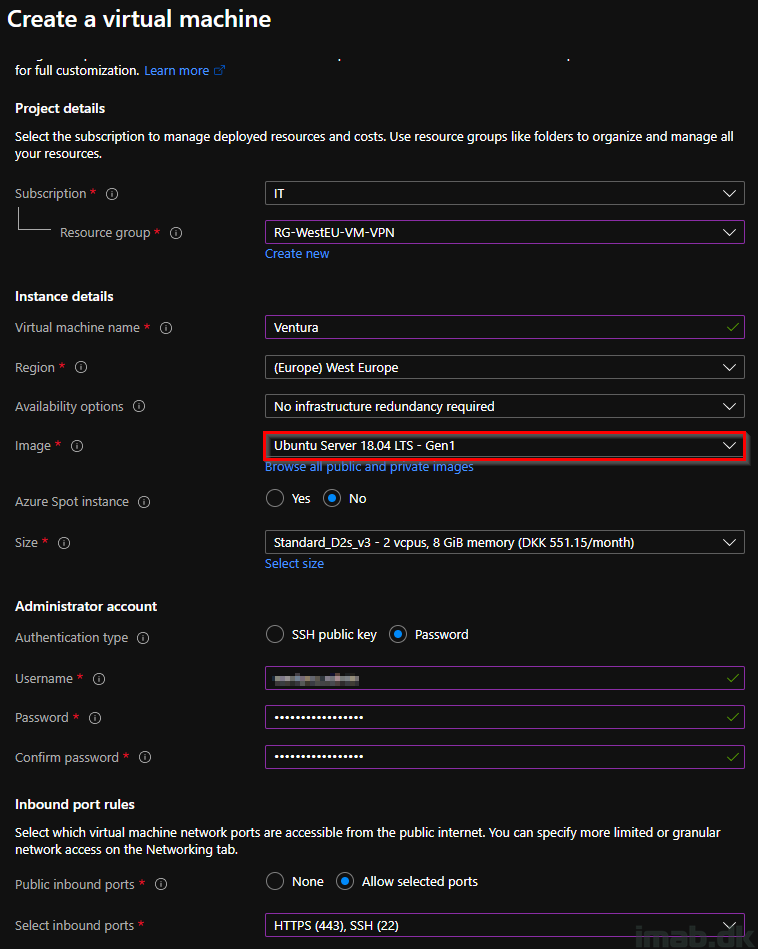 Next important options in configuring the Linux VM, is the Networking tab. In this scenario, I create a public IP address in the process, and verify that the required inbound ports are selected. 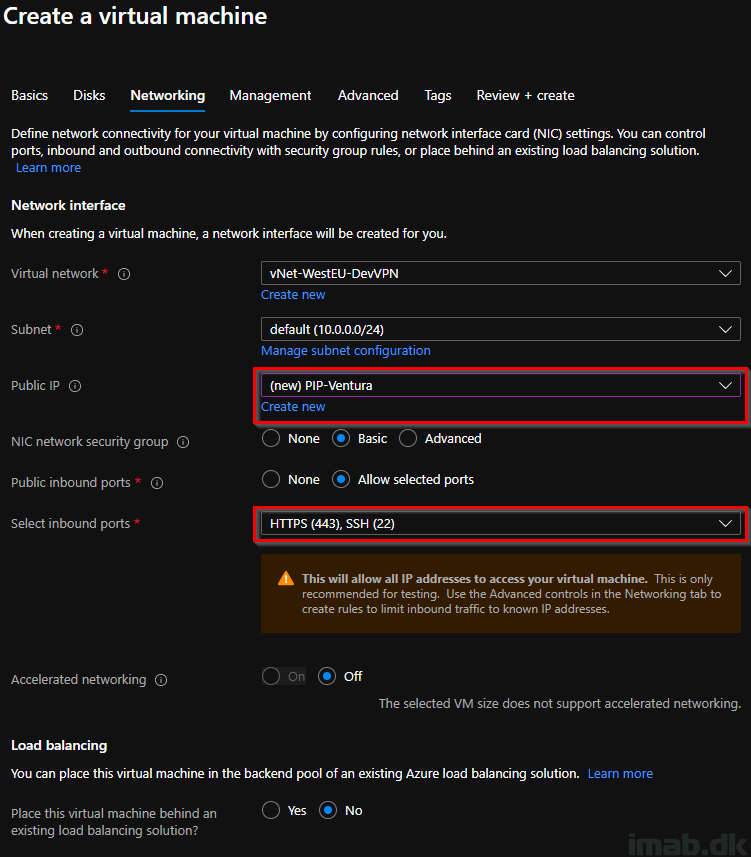 And accepting your choices and creating the Linux VM, will give you a Deployment is in progress screen like shown below:

SSH is wide open to the Internet at this stage of the Linux VM. What I like to do here, is to lock it down to my own public IP address, making sure that only devices coming from my end, can SSH into the Linux VM.

NOTE: Again, depending on how your network is done, the Linux VM might be reachable from the inside of your network, and opening SSH to the Internet might not be needed at all. Consult with your networking team.

My Linux VM is assigned a static public IP address, and this can be found when browsing the VM in Azure:

This public IP address is used with my DNS provider, to create an A record: tunnelgateway.imab.dk

SSH to the Linux VM

Before attempting to SSH into the Linux VM, I’m testing the newly created A record as well as whether port 22 is open.

The result below is what I wanted to see: My host name is resolving to the public IP of the Linux VM and port 22 is open.

I’m using Windows Terminal as my SSH client. PuttY or whatever you might prefer, will do it as well.

As illustrated in the image of the creation of my VM, I specified an admin user as well as a password.

I’m using this user and password to connect via SSH to the Linux VM in Azure: 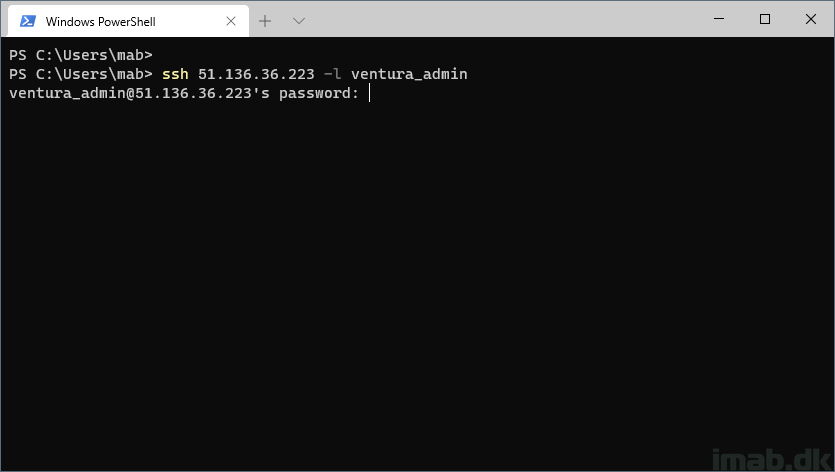 When successfully connected, Windows Terminal will have an appearance similar to below illustration: 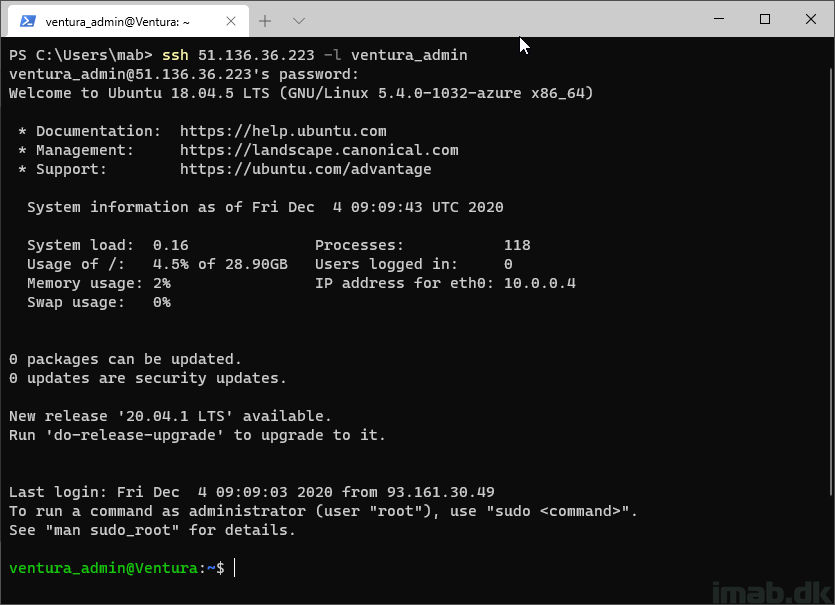 The installation of Docker is straightforward and completed in a few steps.

Either follow my outlined steps below, or use the official documentation found here: Install Docker Engine on Ubuntu | Docker Documentation

Update the apt package index and install packages to allow apt to use a repository over HTTPS: 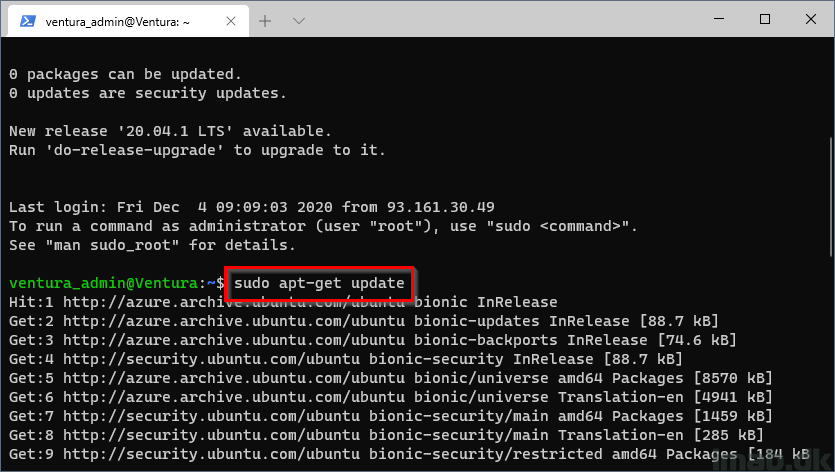 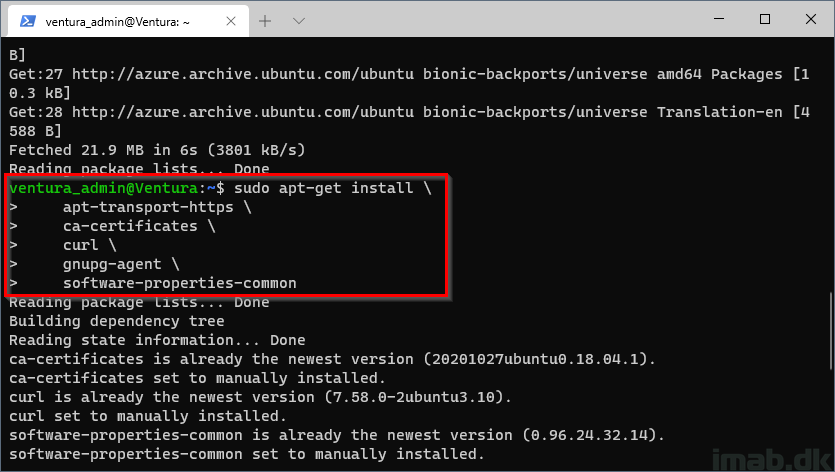 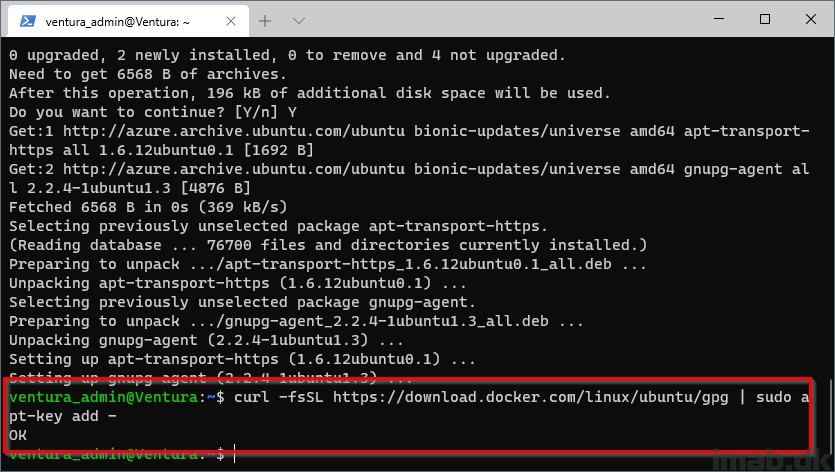 Use the following command to set up the stable repository: 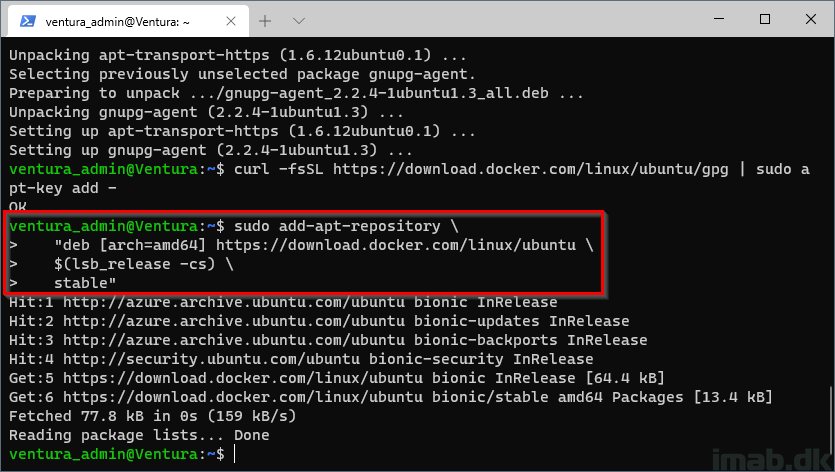 Update the apt package index, and install the latest version of Docker Engine and containerd:: 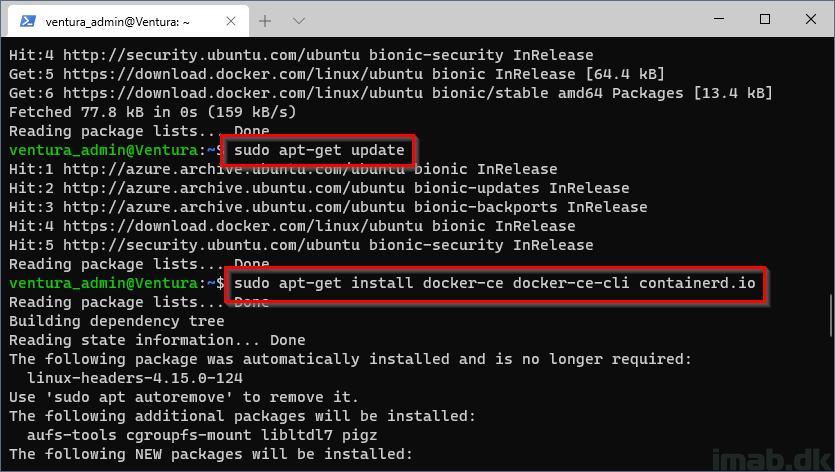 Verify that Docker Engine is installed correctly by running the hello-world image: 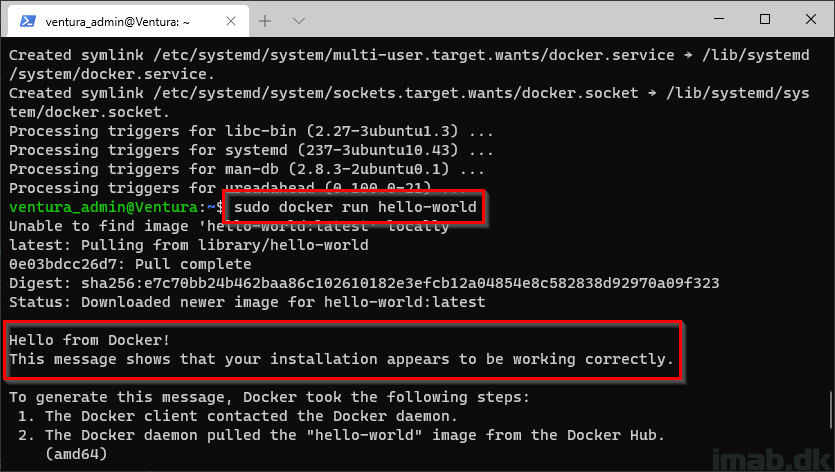 The configuration in Microsoft Intune is close to self-explanatory, and does not require much explaining in details.

I will give you screenshot of my configuration, and explain where needed. I think seeing real screenshots, paired with this guide, where the Linux VM ends up in the shown configuration, is sufficient for the understanding.

Again, this cannot be done properly without involving your networking team or at least knowing ups and downs in your network and infrastructure. 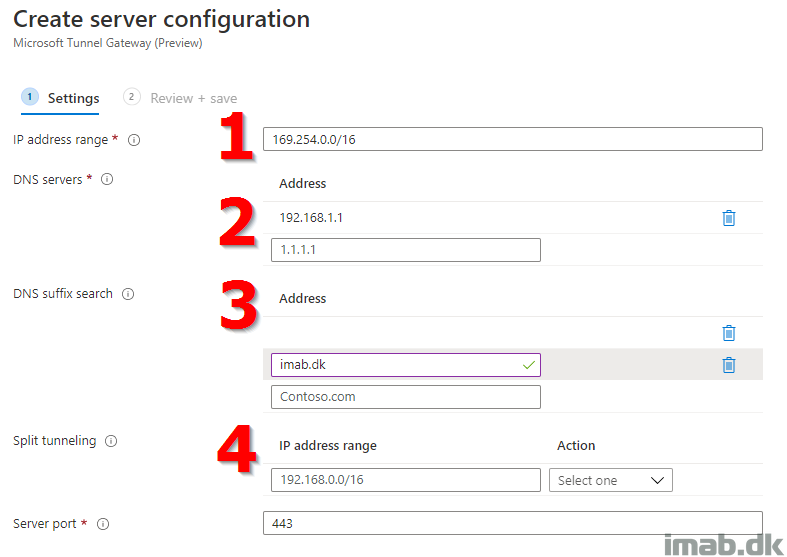 The site is associated with your server configuration. The site also determines which public IP address or FQDN that your devices are connecting to.

The FQDN is going to match the A record you created in your public DNS earlier (and also match the TLS certificate you are going to use later in the setup). 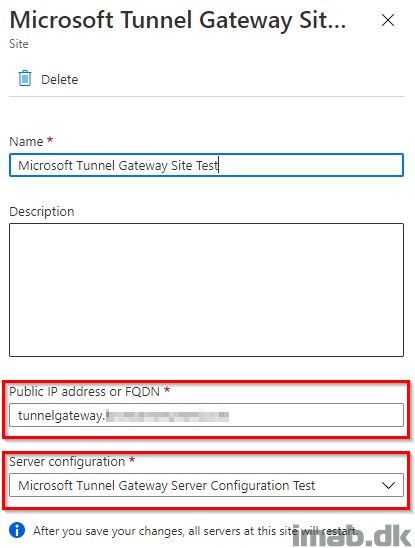 With the configuration in Microsoft Intune in place, we can move on with the installation of the Microsoft Tunnel Gateway.

Either follow my outlined steps below, or use the public documentation found here: Install and configure the Microsoft Tunnel VPN solution for Microsoft Intune – Azure | Microsoft Docs 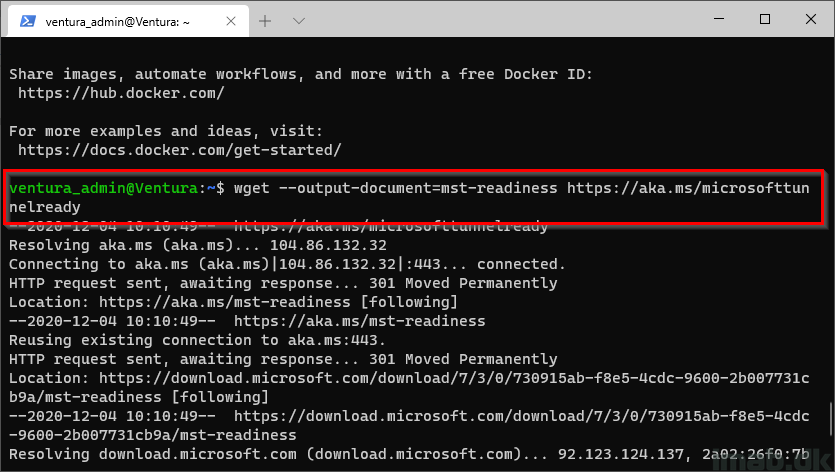 Allow the readiness script to be run: 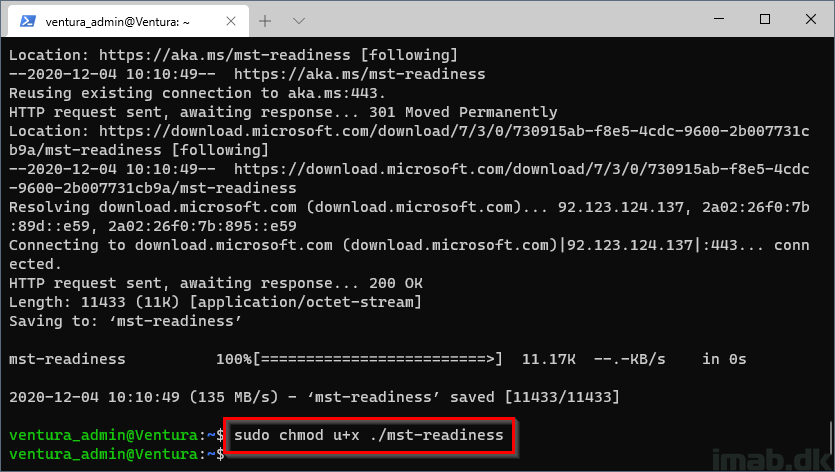 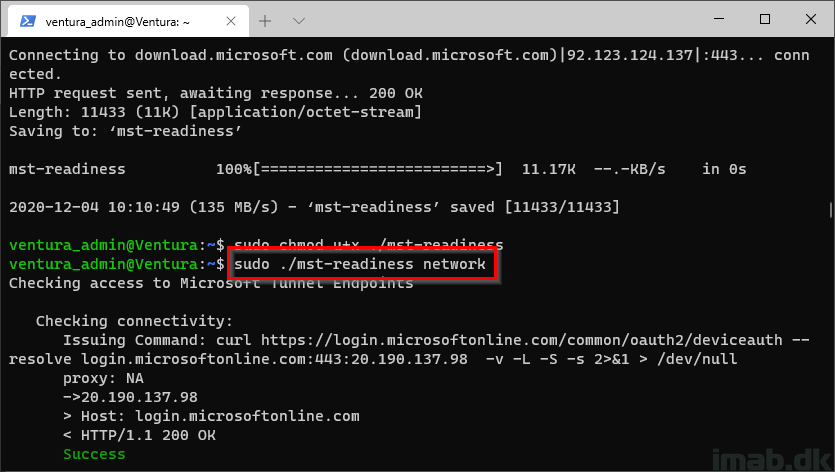 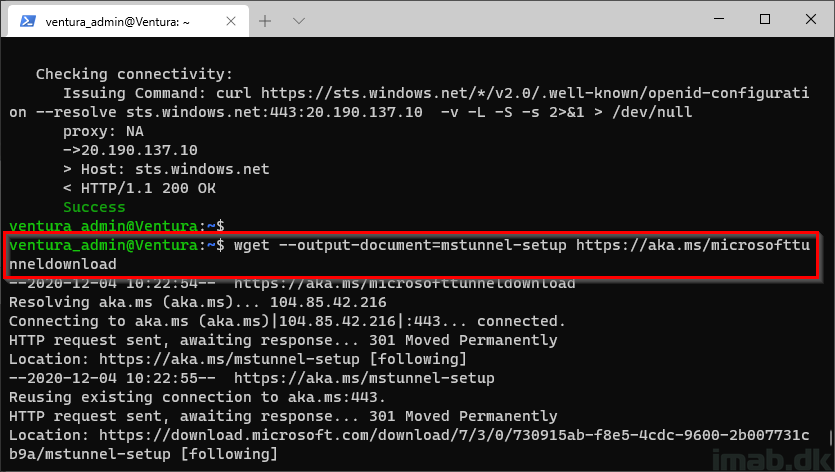 Allow the Microsoft Tunnel setup script to be run: 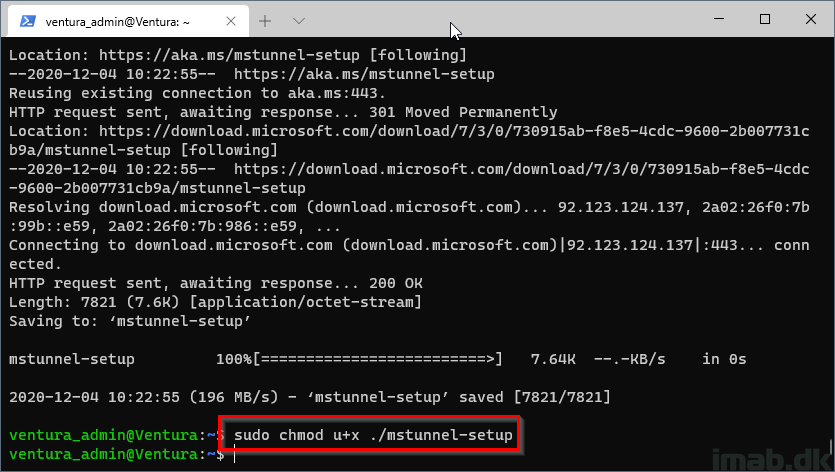 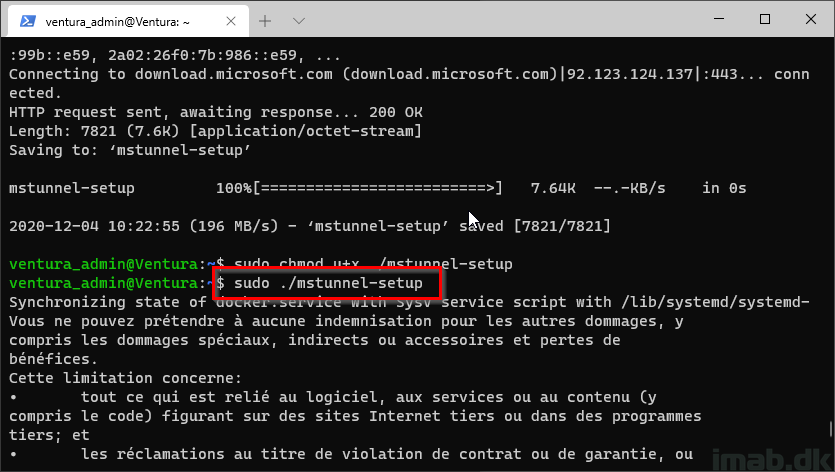 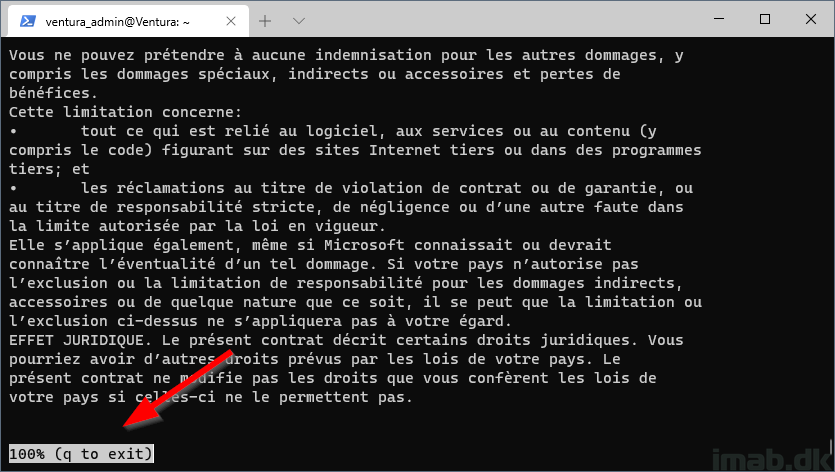 These following steps are particular interesting, as this is where you need to copy down your TLS certificate used for the FQDN specified in the configuration in Microsoft Intune. 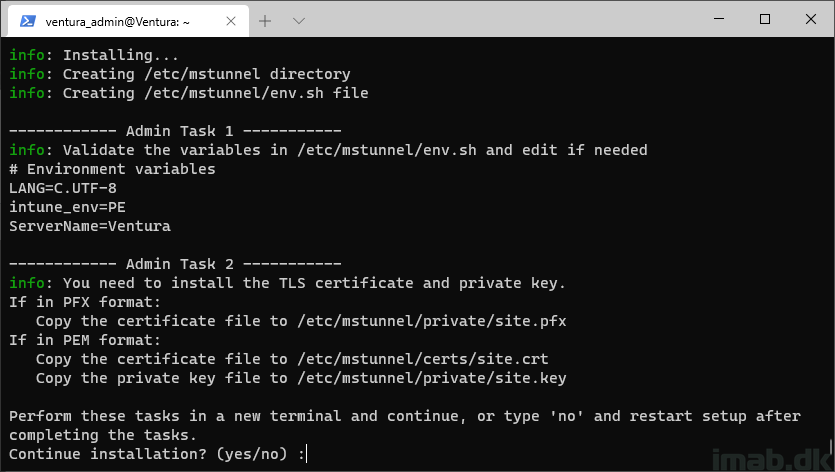 The setup will continue, and this is important, because the folder structure for where the SSL certificate are going. will be created for us in the process.

However, the setup will pause and ask you to install a certificate before continuing. 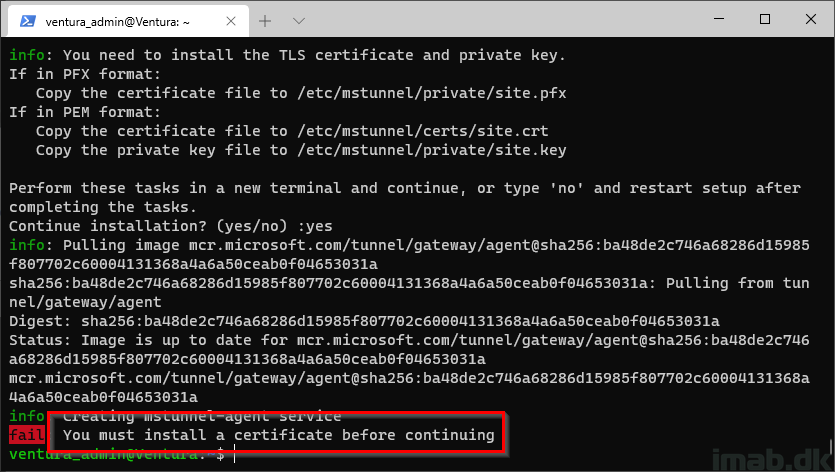 What I did here, was to upload my certificate in .pfx format and use wget to download it directly onto the Linux VM.

The official documentation here is somewhat lacking, and has no information on how to do this. I came up with this approach, as the readiness script and installation script is downloaded in same fashion. 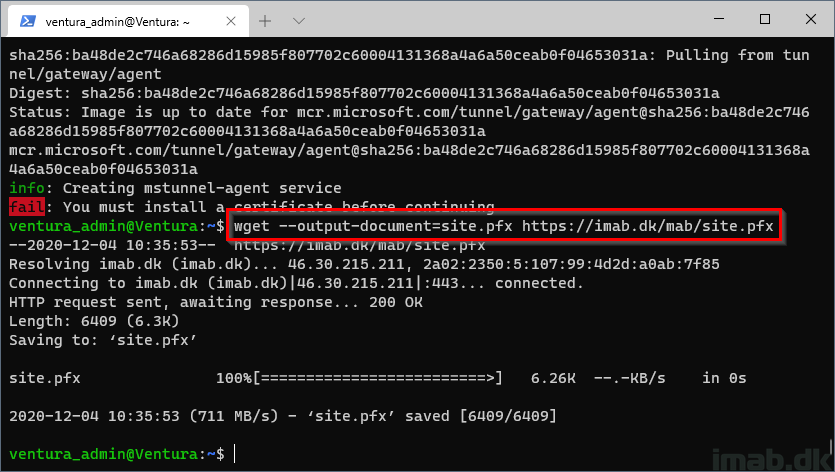 Now we need to copy the certificate over to the correct location: 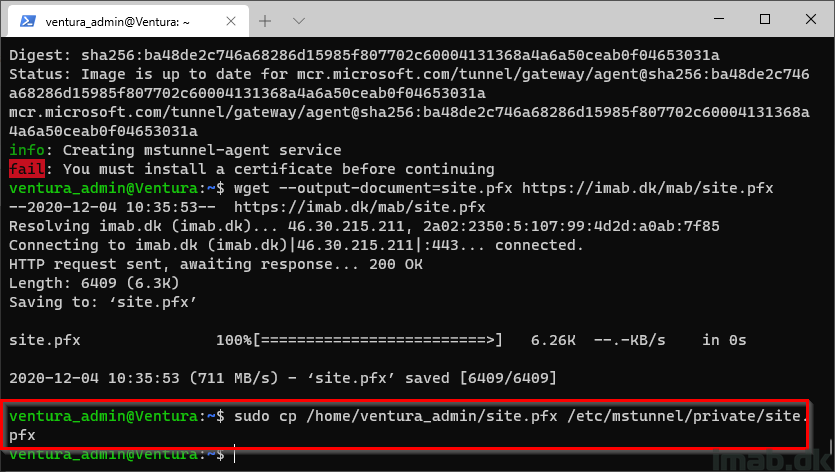 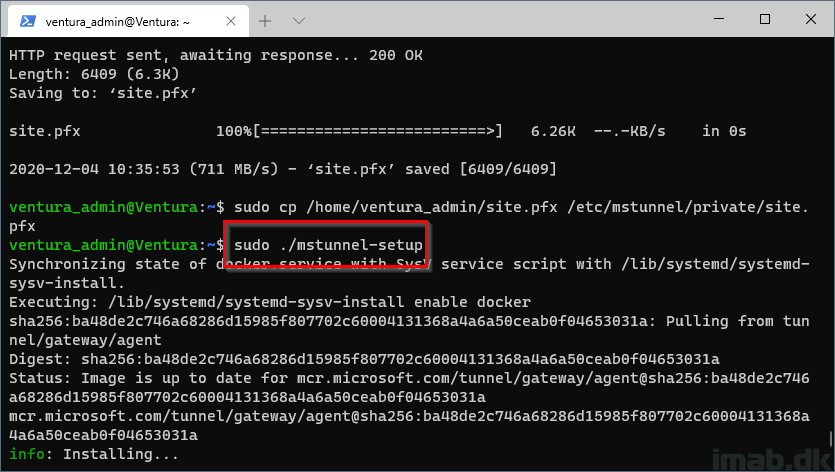 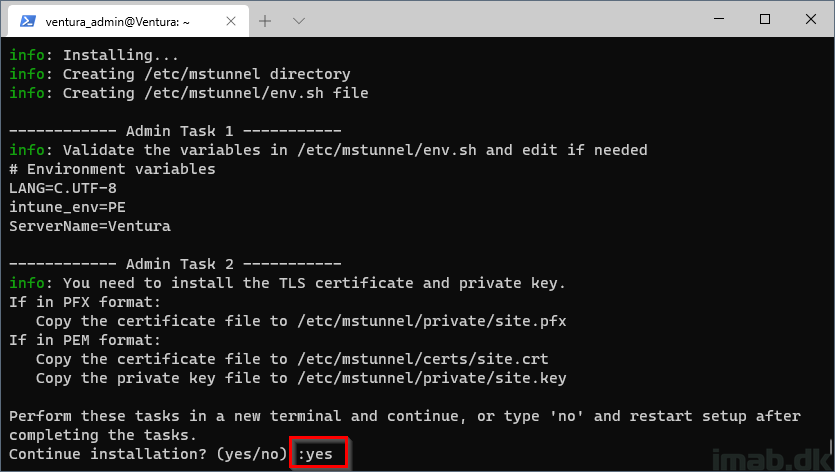 This time the installation recognizes that we put a TLS certificate in the correct location and prompts us for the import password: 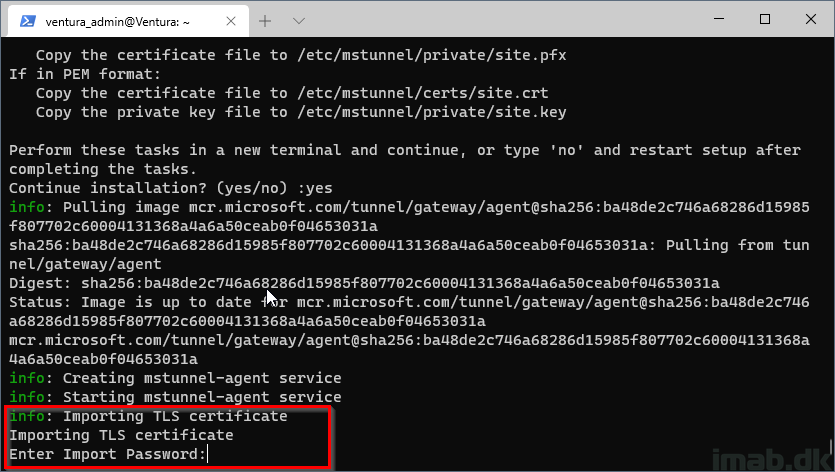 Now it’s time to allow enrollment of the server into your tenant. 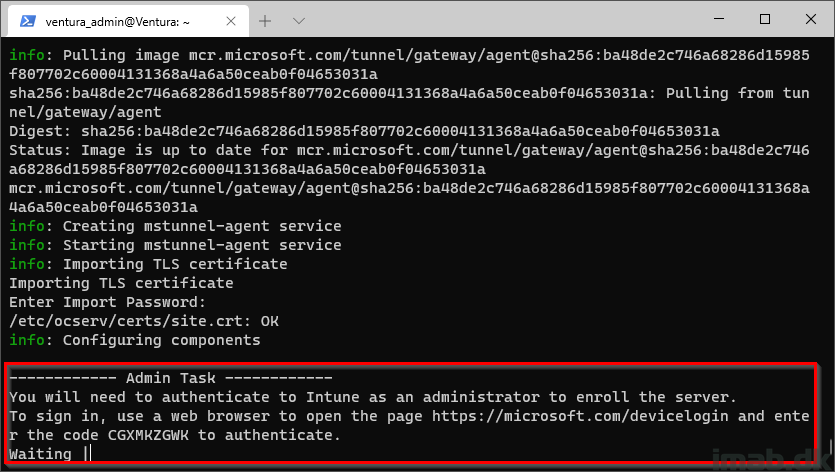 If you have multiple Microsoft Tunnel Gateway sites, the installation will prompt you to enter the ID of the site you wish to join the server into: 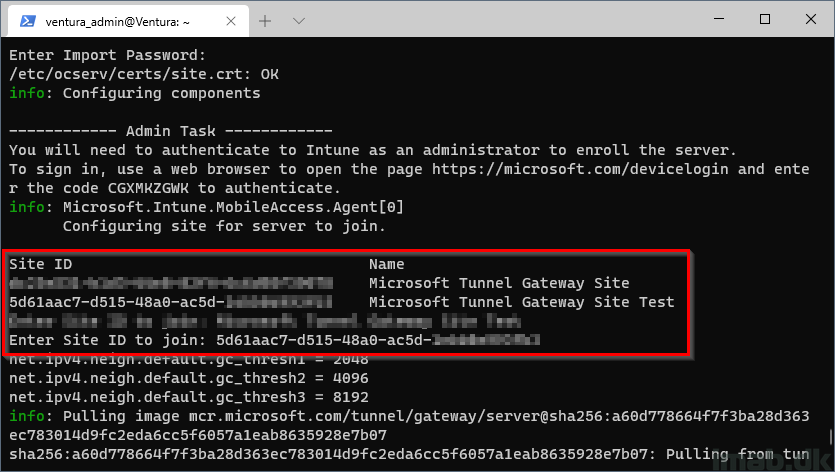 And the installation is complete when below information is being displayed: 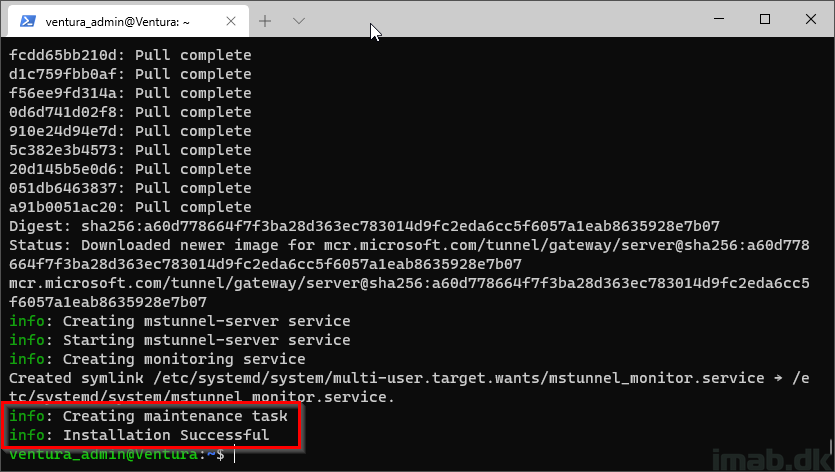 Taking a peek in the Microsoft Endpoint Manager admin center, you will now see your server on the list when browsing the health status, as well as the servers tab:

Create a VPN configuration for iOS in the Microsoft Endpoint Manager admin center and select the Microsoft Tunnel Gateway site you created during this post.

The rest of the options in the iOS VPN configuration are optional, and I have left them out on purpose. 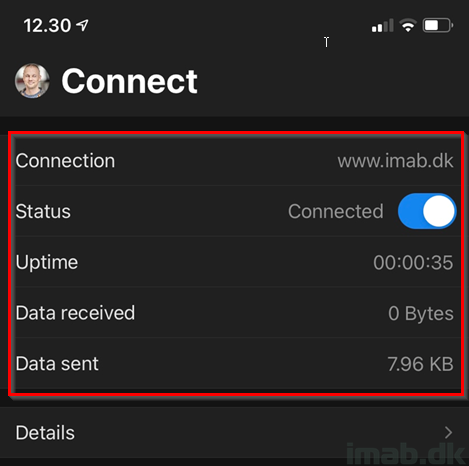