KB3000850 is treated as any other updates, and is being downloaded and deployed with my Configuration Manager 2012 environment.

Doing so out of the box was however not without obstacles. The updates is classified as a regular update, and therefore has a max. runtime set to 10 minutes.

Deploying the update as it is, was resulting in a failed status, and this in the WindowsUpdate.log:

This translates into maximum runtime exceeded, so you will have to go ahead and change that. 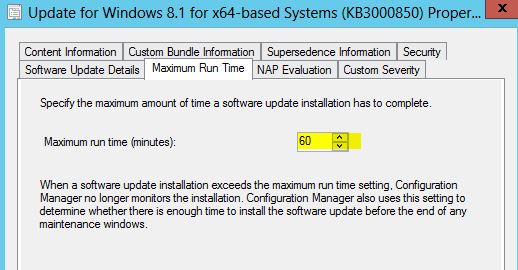 The update has a size of a service pack, so I allowed 60 minutes just be sure.