Why would you do this, when there’s a built-in option to do so, you may ask?

Well, I needed an alternative, as I kept getting some weird errors when using the built-in configuration profile in Intune. The errors only happens for me on Windows 11, so while I’m investigating these, I wanted to have an alternative in order for us to move on with our Windows 11 process.

Also, there’s still no option to lock the VPN strategy to SSTP-only in the native configuration profile in Intune. For that I used to run another weekly PowerShell script, resetting the strategy from IKEv2 to SSTP-only. Using a solution like this, also removes that requirement. 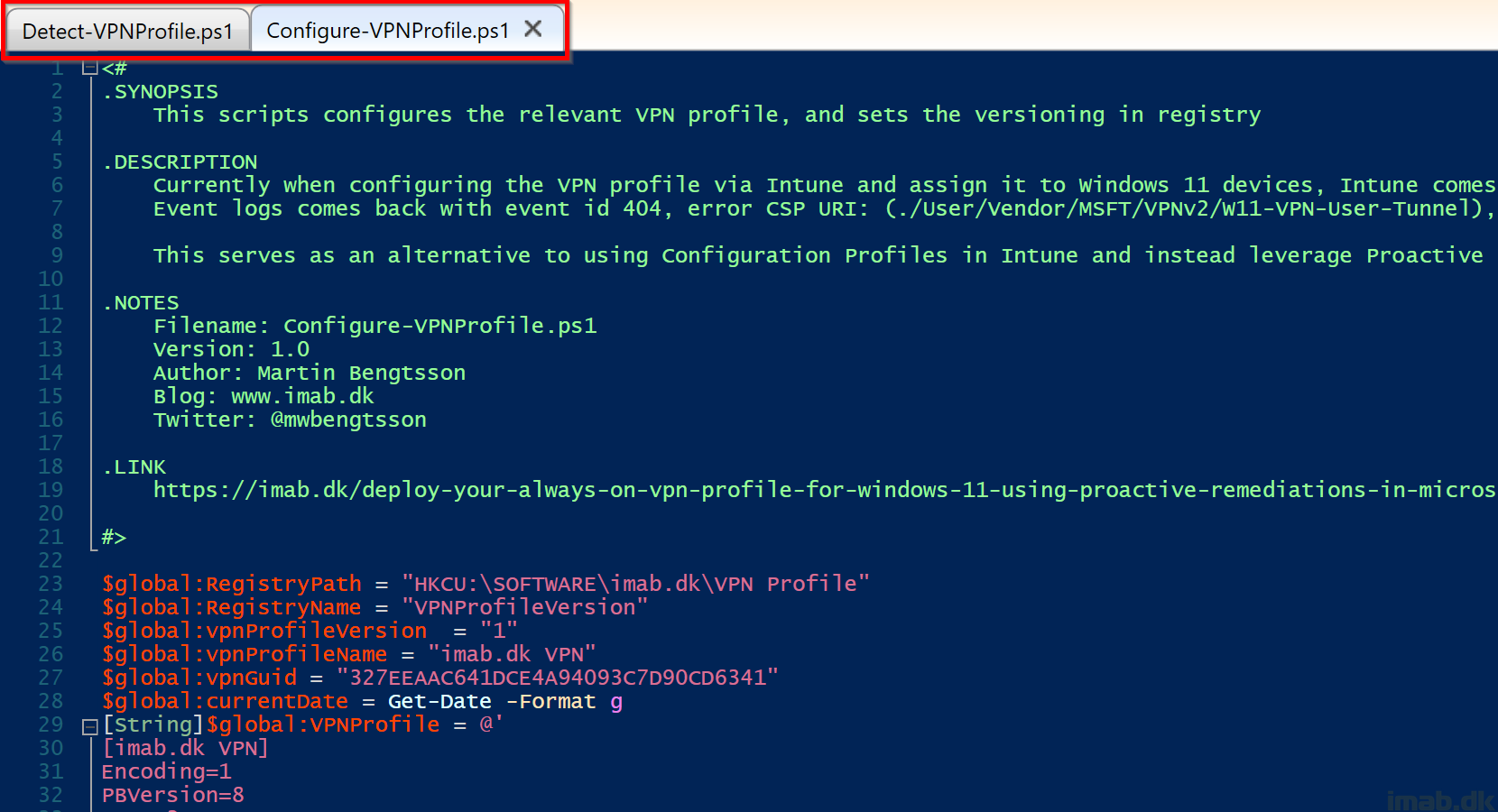 The initial error I get with the usual Always On VPN configuration on Windows 11, is illustrated below:

This is also translated into following error in the Microsoft-Windows-DeviceManagement-Enterprise-Diagnostics-Provider event log, also as illustrated below:

The result on the device is, that the VPN profile comes and goes with each MDM sync, rendering the VPN connection useless. 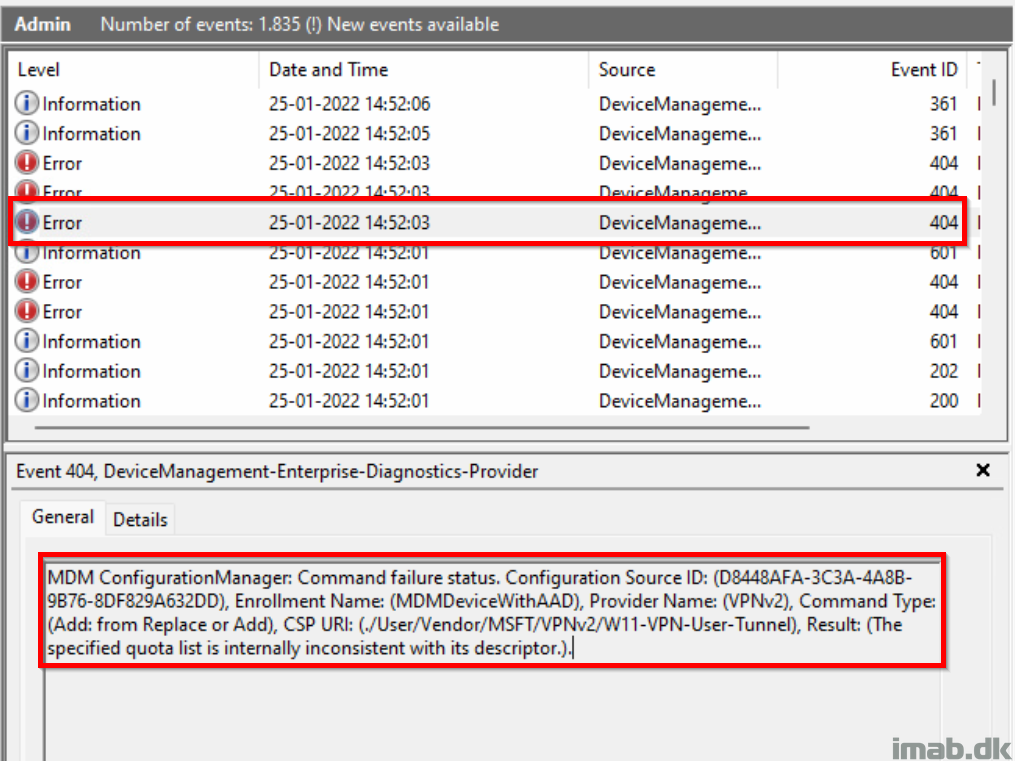 I’ve narrowed it down to be related to the split tunneling routes. If I remove all the routes configured here, the error goes away.

Even configuring a single route, breaks the entire VPN profile and I have no clue why. I also see other people mentioning the same issue, when searching around the Internet. 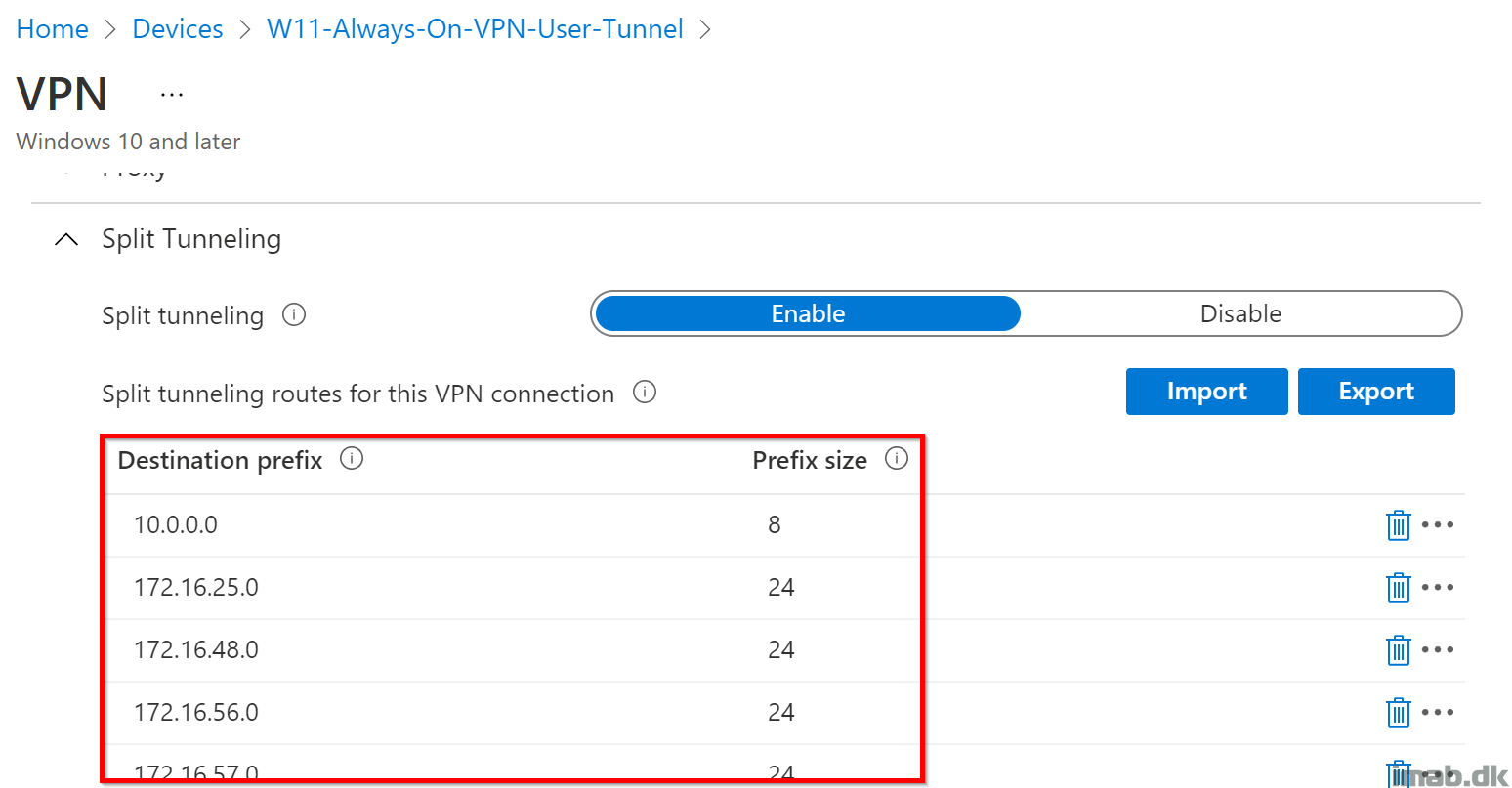 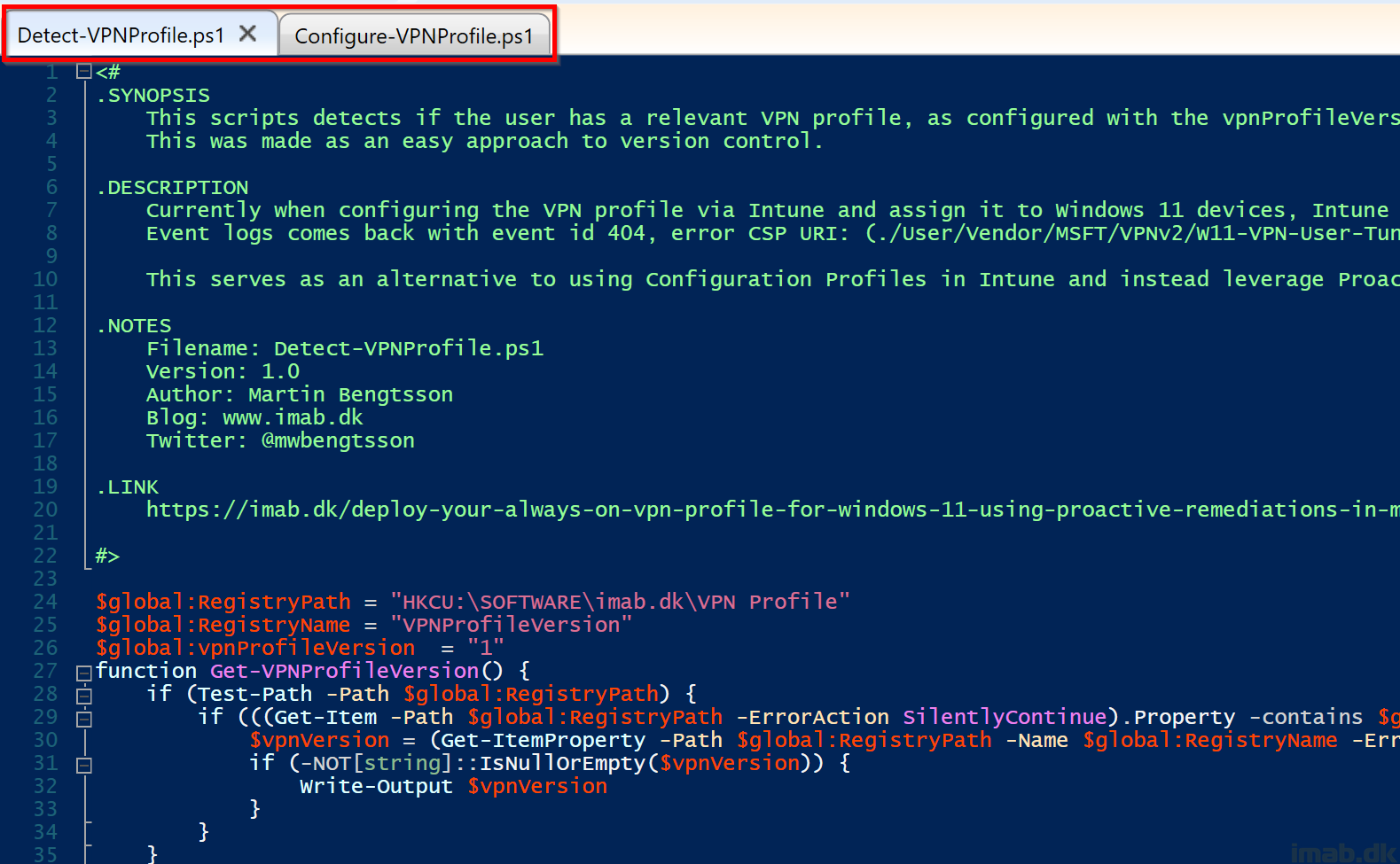 This script does following in headlines:

This script does following in headlines:

Make sure that you edit this portion, to suit your rasphone.pbk file: 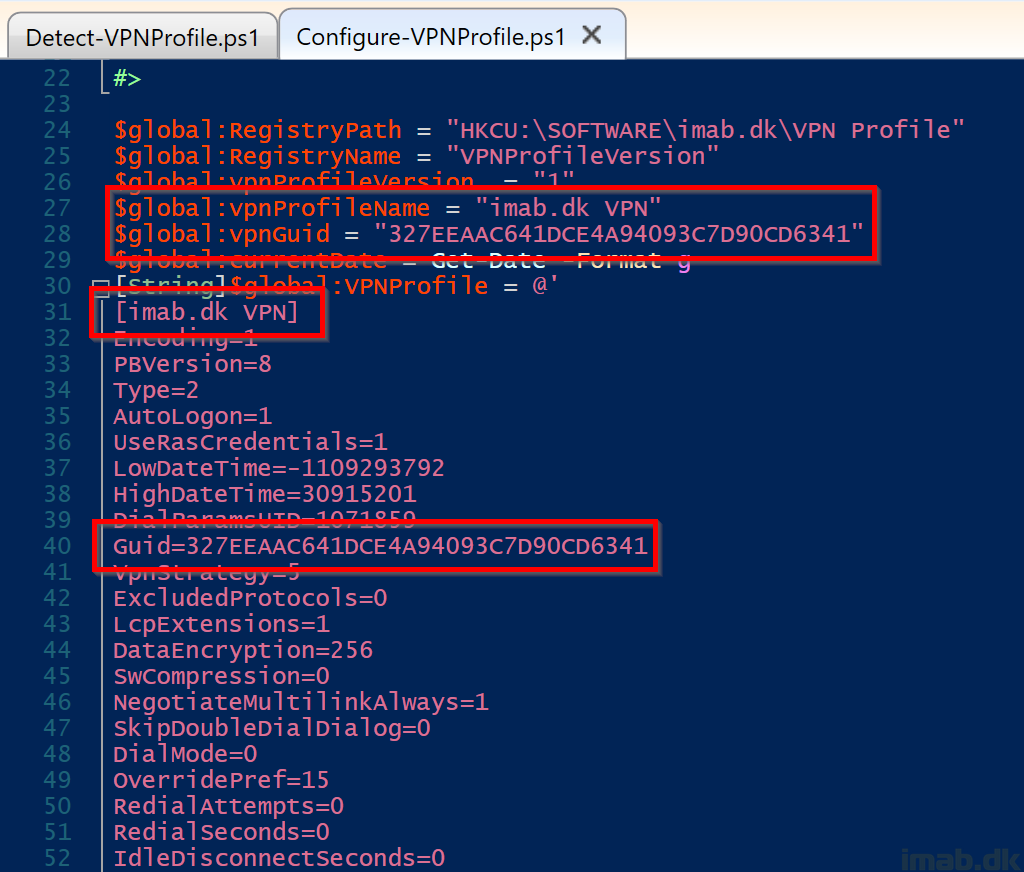 The entire $global:VPNProfile variable needs to be replaced with your own content. That be the content of a rasphone.pbk file you created yourself or Intune created for you. 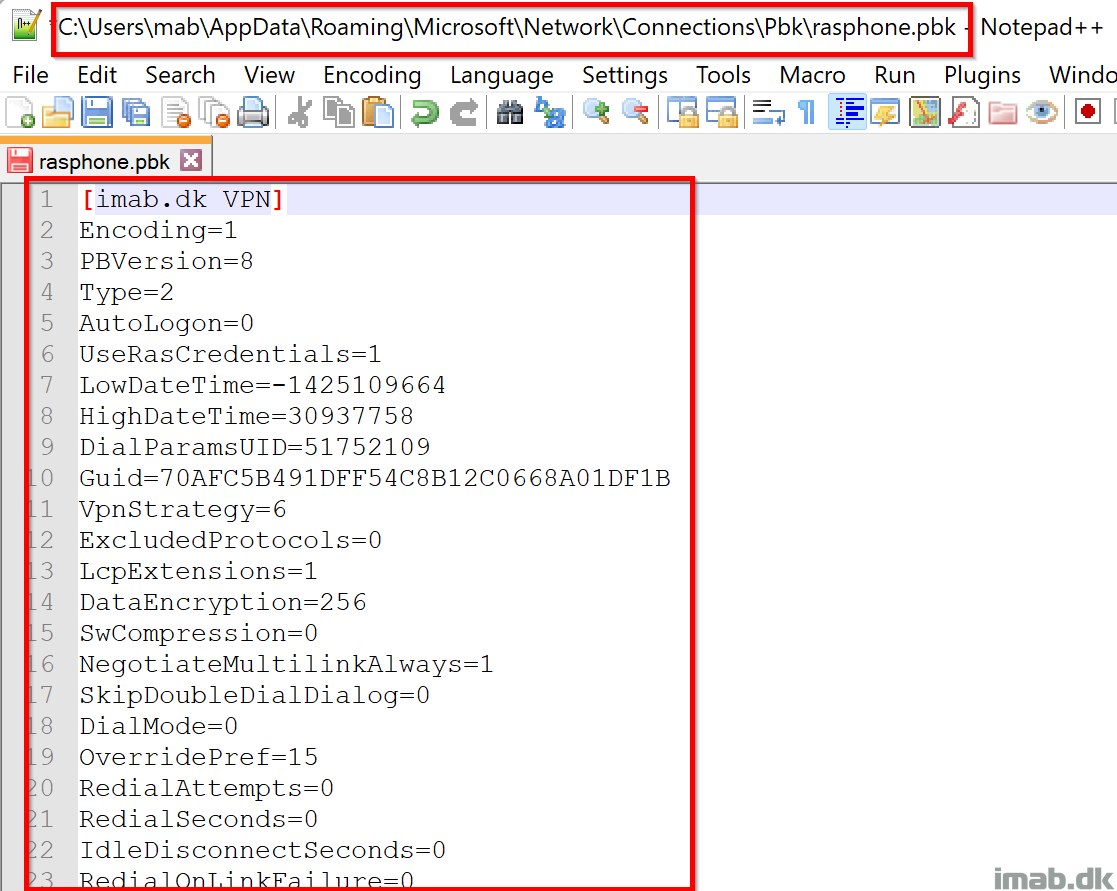 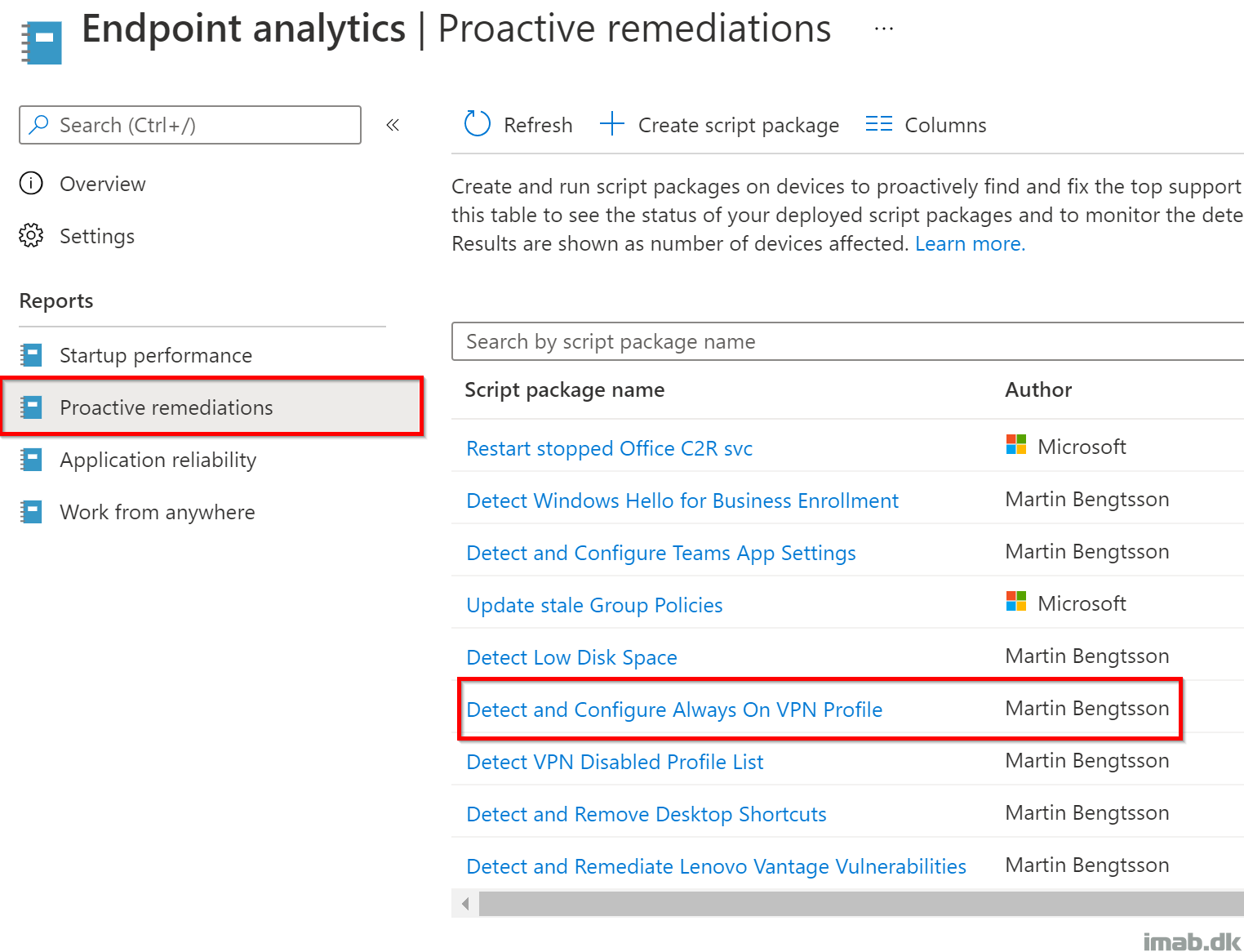 Use the 2 scripts explained above as illustrated below: 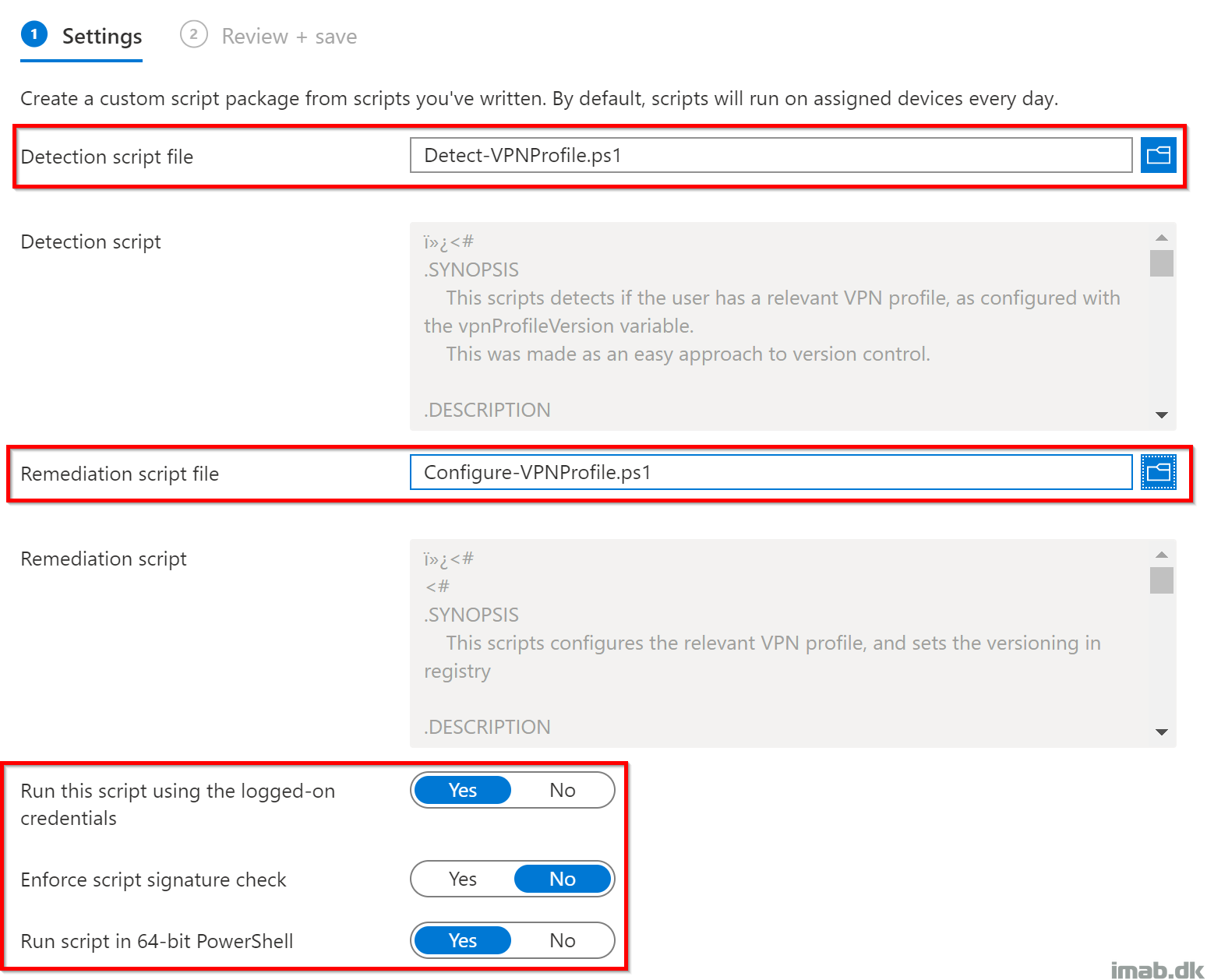 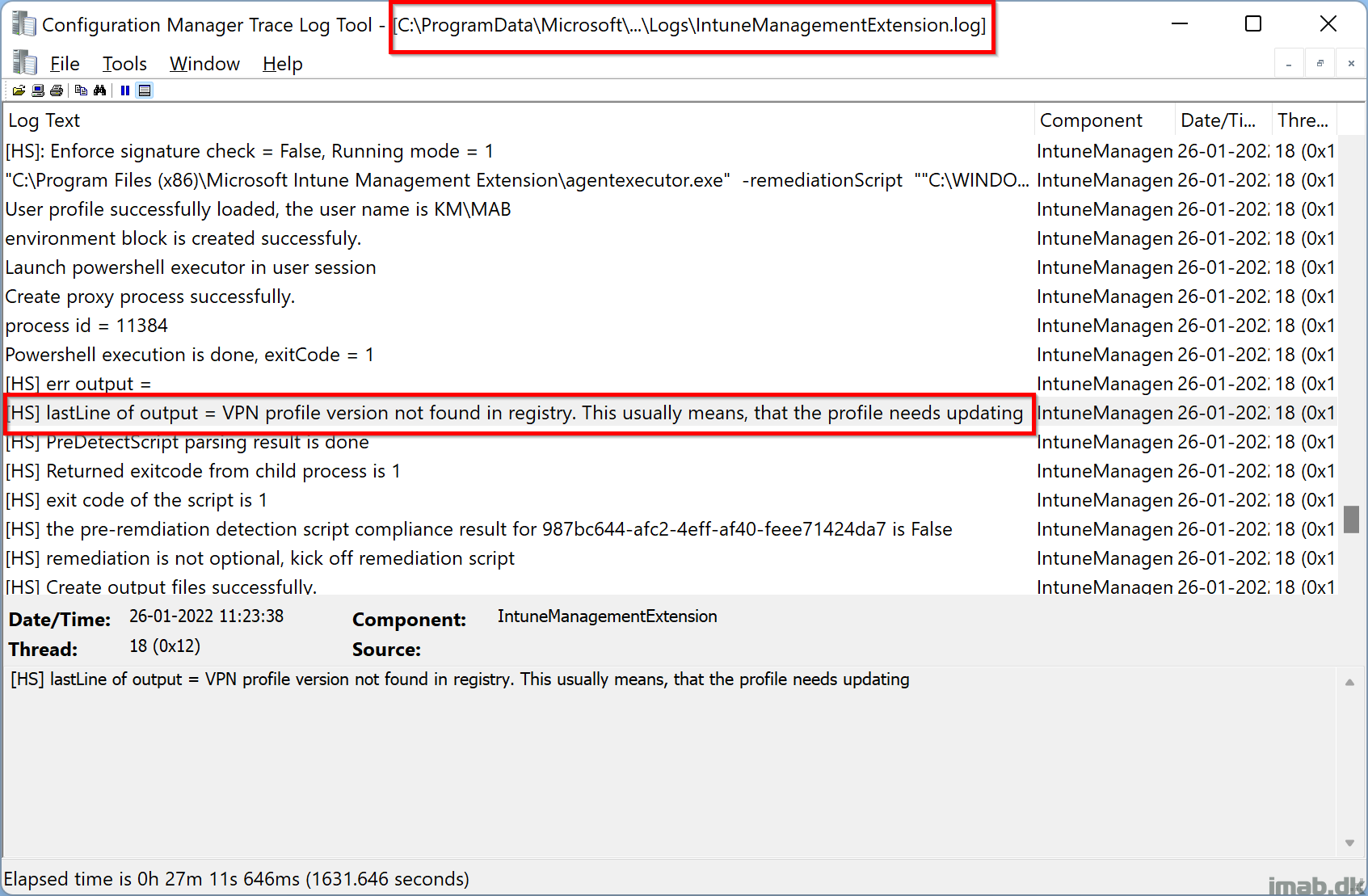 When the Configure-VPNProfile.ps1 kicks off and finishes, the IntuneManagementExtension.log will yield following: 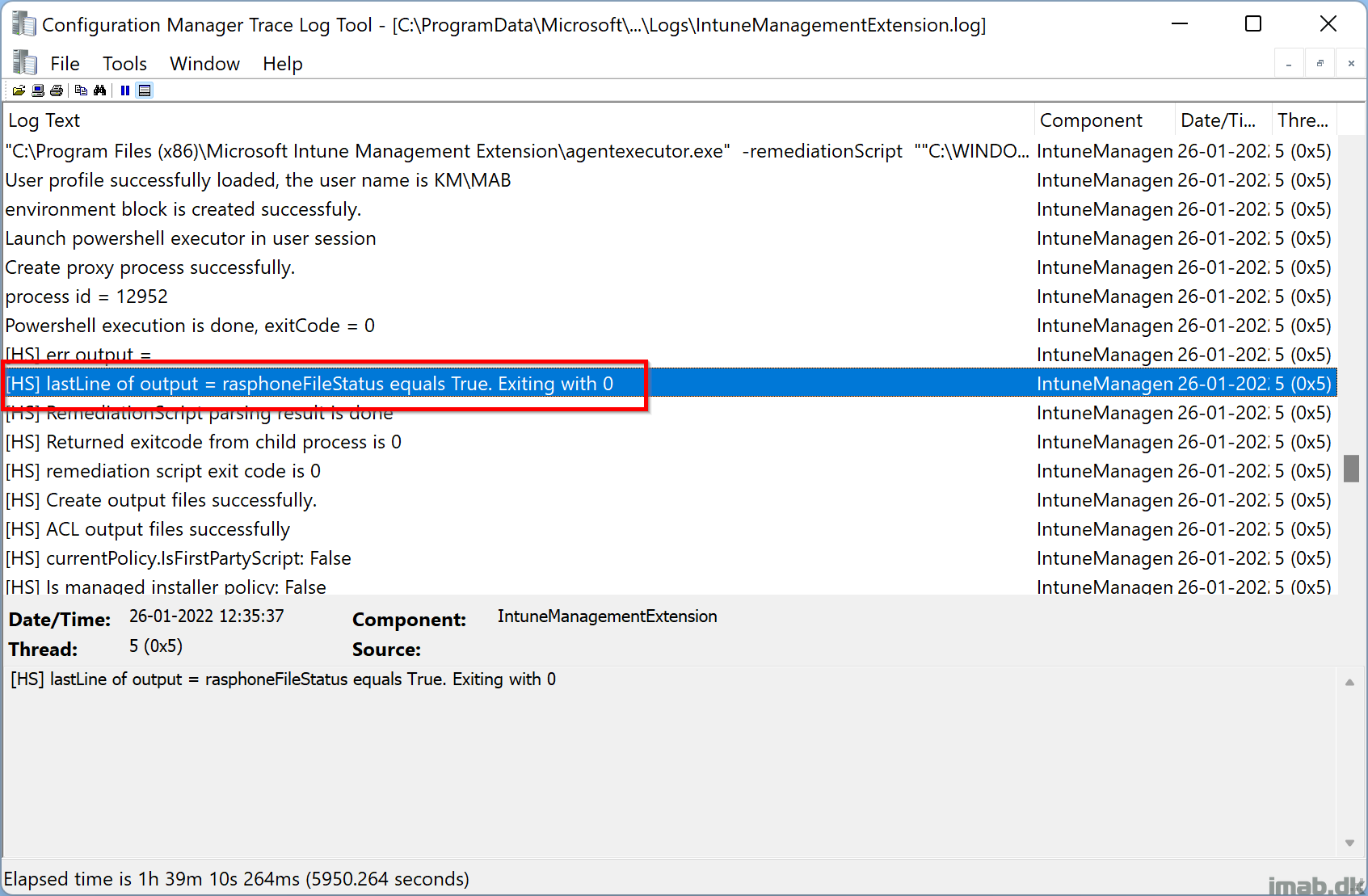 When the Detect-VPNProfile.ps1 script finds that no new version is available (comparing registry with the version defined in the scripts), the IntuneManagementExtension.log will yield following: 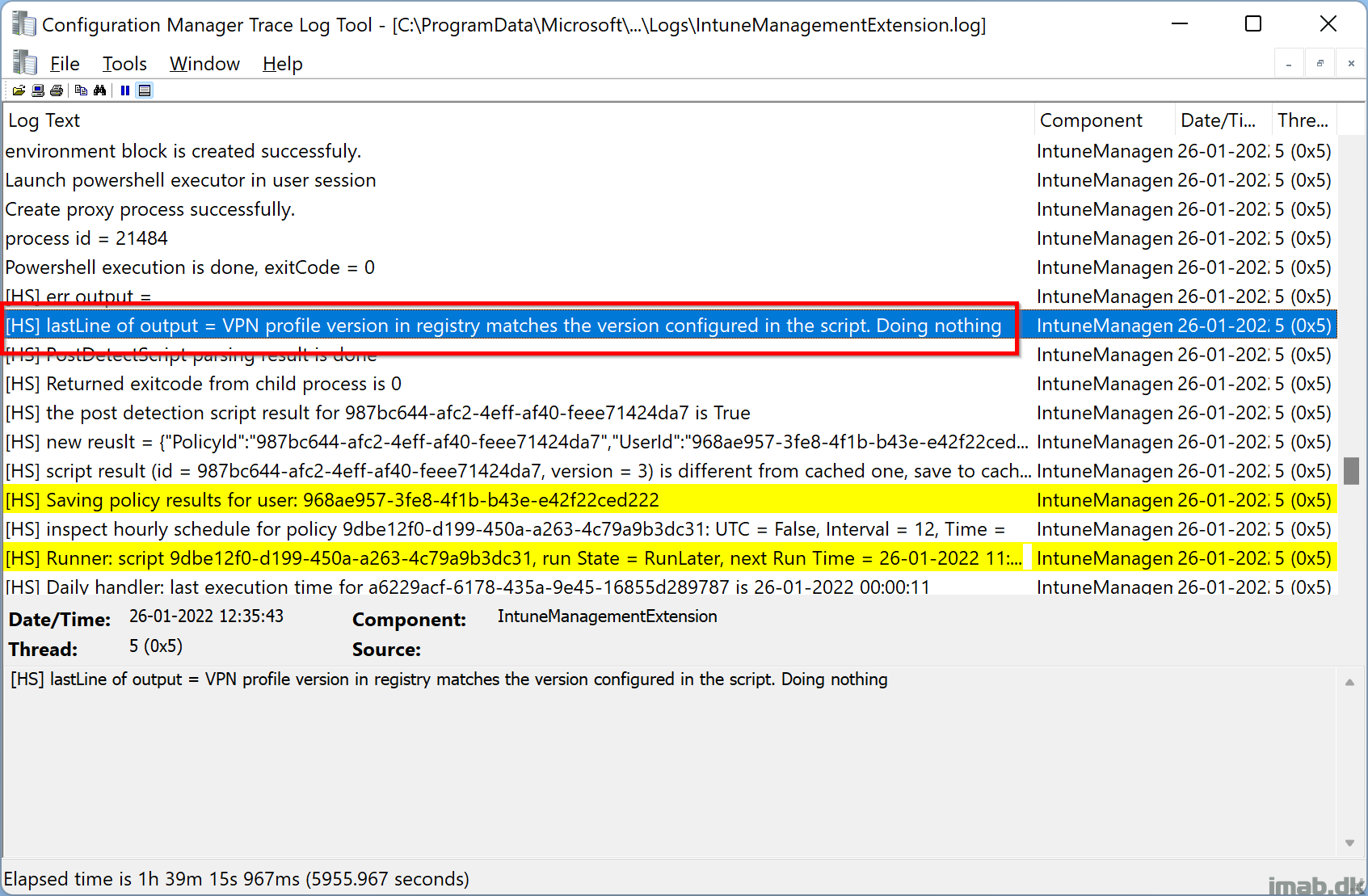 When you want to deploy a new version of the VPN profile, simply do following: 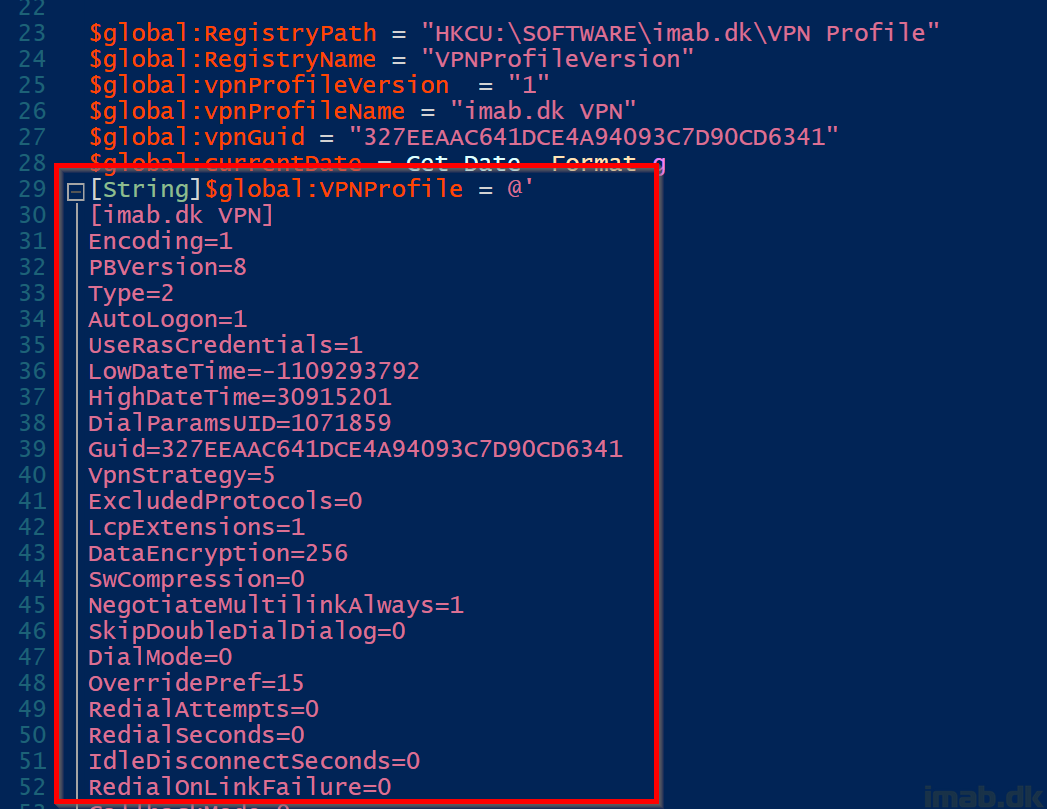 For your convenience, this is an illustration of the area in registry, which is used for version control of the deployed VPN profile: