While brewing on another blog post, on how I’m preparing for the changes to update channels for Microsoft 365 Apps (formerly known as Office 365 ProPlus), I figured this post will do its justice as a decent opening post.

You may have collections configured for this already, or maybe you don’t. Either way, they probably need some updating before June 9, 2020, as this is the date where the new update channels will start appearing (with the exception of Monthly Enterprise Channel, which is live as we speak).

Also, I’m going to reference some of these collections in my other and upcoming post, so I might as well get this out there, as an help to get started. 🙂

The script is available from my GitHub page here: https://github.com/imabdk/Powershell/blob/master/Create-Microsoft365AppsCollections.ps1

The script accepts and requires 2 parameters; siteCode and siteServer:

The script needs to be edited with details about limiting collections. These needs to reflect real collections that exists in your environment:

Below is an illustration of the result once the script has successfully run: 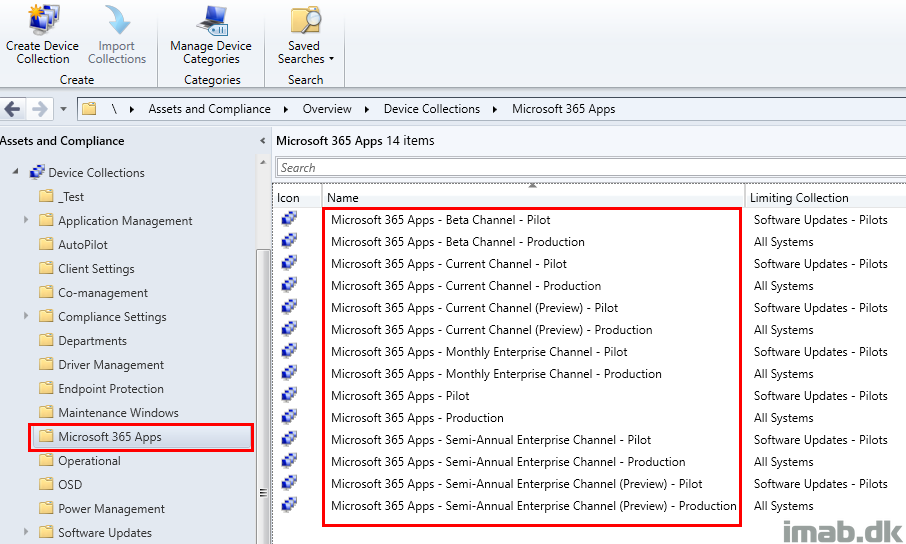 Let’s take a closer look on the query used in one of the collections. Below the WQL query used on the Current Channel (Preview) collections:

So in order for this to give any members, the channel either needs to be set by GPO (or by editing the updatebranch registry key in HKLM\SOFTWARE\Policies\Microsoft\office\16.0\common\officeupdate) OR by actually running the channel with the associated CDNBaseURL.

NOTE#1: I do the membership rule this way to cater for the transition from old to new names, and to make sure I really find the devices running the specified channel, whether it’s set by GPO, modifying the registry or just by querying the running channel.

NOTE#2: I’m not setting ‘Use incremental updates for this collection’ automatically. This is intended. I will let you do that yourself if desired. 🙂 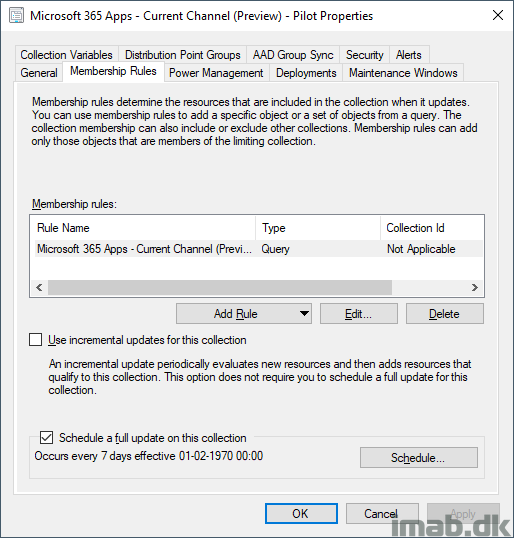 For good measures and everyone’s reference, below a complete list of the channel names and their corresponding URL identifiers.

In my upcoming post I will explain how I’m switching update channels using Configuration Items, as well as the design of my device collections (using the provided script in this post) and how I deploy updates for Microsoft 365 Apps.