I have no idea if this is something that has already been created out there, but I figured I’d do it anyway. Mostly because Powershell, I need the practice and I needed the ability to easily modify the BIOS in our Lenovo environment.

The script is inspired by the original VB script from Lenovo, which roughly does the same as my Powershell script. Lenovos script and documentation can be reached from this link (https://support.lenovo.com/dk/en/solutions/ht100612). However, it’s VB and it gives me shivers, so Powershell to the rescue.

The script is still work in progress, as it doesn’t hold all the abilities as the original Lenovo script, but I prioritized the ability to turn on/off following: Virtualization, SecureBoot, PrebootUSB-C/Thunderbolt and TPM.

An example from the use in my recent Windows 10 Task Sequence. The step is run prior to formatting the disk in WinPE. I have a condition on the step, to only run if a Lenovo laptop.

Enable Preboot Thunderbolt is separated as a single step, as it’s currently only the most recent Lenovo laptops which has this ability: T470s, X1 Yoga 2nd generation etc., and therefore has a condition to only run if such model is being deployed.

I’d appreciate any feedback. I’m by no means any Powershell champ, but I’m still learning – and willing to learn 🙂 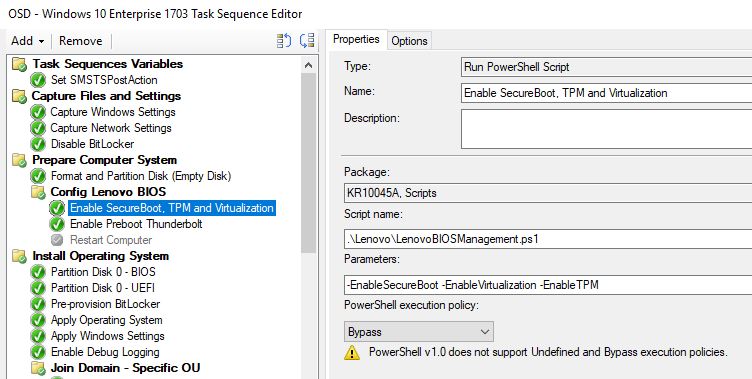